Pressure from the water behind Wanapum Dam may have contributed to the big crack that has disrupted operations at the structure, the Grant County Public Utility District said.

The cause of the crack remains unknown, but the utility said it had ruled out four possibilities. Ruled out were seismic activity, foundation settlement, operation of spillway gates, and explosions at the nearby Yakima Training Center operated by the U.S. Army.

Chuck Berrie, assistant general manager of the utility, said learning the cause could occur as soon as the next two or three weeks.

The 65-foot-long crack was detected by divers on Feb. 27, three days after a worker at the dam noticed that the top of a spillway pier had shifted slightly. When the reservoir behind the dam was drawn down by 26 feet, the pressure on the spillway was reduced and the fracture closed. 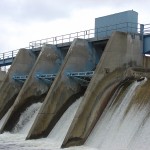 Six holes have been drilled into the pier and more holes are planned to determine the geometry of the fracture and how far it goes into the pier, the utility said.

“We are taking core samples of the concrete and analyzing that” to determine its strength, Berrie told the Northwest Power and Conservation Council on Wednesday.

Drilling has been temporarily suspended while the utility assesses the best way to complete the task.

The utility said it may be June before a repair plan is formulated.

The reservoir shoreline exposed by the drawdown will remain closed, the utility said. The drawdown has left docks and boat launches on the reservoir high and dry.

“You are going to see some serious recreational impacts,” Berrie said of the summer boating season.

The utility continued to work on modifications to the fish ladders at the dam, which allow migrating fish to pass through the giant structure. The modifications, required by the drawdown, should be completed next Tuesday, the utility said.

“We anticipate fish passage will work quite well,” Berrie told the council. Fish should start their migration as early as next week, he said.

The giant dam, which is 8,600-feet across, continues to generate electricity at 50 to 60 percent of its capacity, the utility said.

The crack runs the entire 65-foot width of the concrete base of the dam’s No. 4 spillway pier, but it is not clear how deep it runs. The dam has a total of 12 spillways and is located just south of Vantage, where Interstate 90 crosses the Columbia River.

Despite public fears when the crack was revealed, Berrie said there was never a chance that the entire dam would fail.

“We knew immediately there was not a real flood danger,” he said.

The reservoir will remain at its current level until the exact cause of the crack is identified and repaired, the utility said.