The scarcity of irrigation water in drought-stricken California has created such a demand for well drilling services that Central Valley farmer Bob Smittcamp is taking matters into his own hands.

He’s buying a drilling rig for $1 million to make certain he has enough water this summer for thousands of acres of fruit and vegetable crops.

“It’s like an insurance policy,” said Smittcamp, who knows two other farmers doing the same thing. “You have to do something to protect your investment.”

With California in a third dry year, well drilling is booming across the nation’s most productive agricultural region, and some drilling companies are booked for months or a year. In some counties, requests for permits to dig new wells have soared, more than doubling over this time last year.

Farmers expect to get only a fraction _ if any _ of the water they need from vast government-controlled systems of canals and reservoirs interlacing the state. In an effort to make up the difference, they are drilling hundreds of feet deep to tap underground water supplies.

Smittcamp said a licensed driller he often hires approached him, saying the demand for drillers is so high that Smittcamp needs his own full-scale drilling rig.

Smittcamp, whose Wawona Packing Co. farms thousands of acres, said he has written a $150,000 check as a deposit and the rest is due upon delivery of the $1 million rig, which he expects to happen soon.

He estimates that he spends $4,000 an acre tending his peach and grape crops before the harvest. If a well were to run dry mid-season with nobody to call, Smittcamp said he could lose that investment _ and perhaps entire orchards or vineyards.

When the rig isn’t being used on Smittcamp’s land, he said the driller will put it to work on neighboring farms to recoup the investment.

The boom driving farmers to such lengths is a result of drought and a steadily improving economy, said John Hofer, an underground water consultant and executive director of the California Groundwater Association. Hofer said his consulting firm started receiving more calls last year, and that’s when he predicted the rising demand for drillers would follow.

“I kept telling my friends and associates to look out, that it was going to get crazy, and it has,” he said. “Drilling is up big-time.”

The figures prove it. In Fresno County, which leads the nation in agricultural production, officials issued 256 permits to dig new wells in the first three months of 2014, more than twice the number compared to the same time last year. That includes all types of water wells used for agriculture and homes.

In Tulare County, the number of permits issued to dig farm wells alone has tripled to 245. In Kern County, farmers took out 63 new well permits in the first quarter of the year, more than quadrupling last year’s number.

The price to dig a well depends on the depth and ground composition, drillers say, costing a farmer anywhere from $50,000 to $500,000 before installing the pumps.

Tapping groundwater has other costs. The water that was deposited underground naturally over thousands of years isn’t being replaced as rapidly as it’s being drawn, causing the ground in the Central Valley to sink in a process called subsidence. In California, there is little if any regulation of groundwater pumping by the state.

In most years, Central Valley farmers draw one-third of their water from wells, while the remaining two-thirds comes from California’s State Water Project and the federal Central Valley Project. Most farmers expect to receive no water from either this summer, and that ratio is dramatically shifting to underground water supplies, which could eventually run dry. 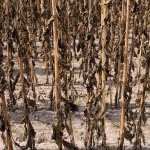 Matt Rottman, president of Rottman Drilling Co. based in Lancaster, said his mid-sized firm of three rigs is backlogged 15 months. For a recent job near Bakersfield, his crew dug a 1,840-foot well. Three wells coming up later this year in the Central Valley will hit depths of 2,000 feet.

Farmers calling Rottman tell him they’re in a pinch. They don’t expect any water from the state and federal water projects this summer, and Rottman said the market price of buying irrigation water elsewhere has shot up three or four times.

“They’re shut off,” he said. “They’ll be looking at crop damage if they don’t get wells in.”

Mike Maggiora, owner of Gillroy-based Maggiora Bros. Drilling Inc. and president of the California Groundwater Association, said he suspects that some drillers are backlogged because farmers are calling several firms to see who responds first. He’s booked for the next three months.

His eight crews work 24 hours a day for weeks drilling each well, which Maggiora said is a nice change from two years ago when the economy was bad and work was hard to find.

Now, Maggiora said he has trouble finding workers willing to put in the grueling hours. He also fears today’s boom will cause a run on supplies, such as the steel casings used to keep the walls from caving in. So he’s ordering them by the truckload.

Smittcamp said he worries that so much drilling could cause underground water supplies to run dry in little more than a decade. He blames politicians for failing to give farmers any other options, leaving them to fend for themselves.

This summer, Smittcamp said he has to come up with two-thirds of his water that would normally come from the state and federal water deliveries.

“This year, we get none out of the projects,” he said. “So we’ve got to pump the whole enchilada.”