Scientists have measured rather large ground movement and a strong earthquake around the Yellowstone caldera in the last year, but they have seen nothing that raises concern that the giant volcano might erupt anytime soon, a geophysicist says.

“This really caught my attention because of something else that happened right around that time, which was the eruption of Steamboat Geyser for the first time since 2005,” Cervelli said.

However, the two events are likely unrelated, he said. 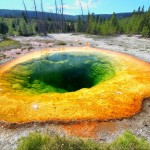 “In spite of the fact that I was really mesmerized by this coincidence in time, in retrospect it turned out it probably doesn’t have anything to do – that is the Steamboat eruption is probably totally independent from this other observation,” Cervelli said.

“Sometimes the most important thing we do is tell people when the volcano is not erupting,” Cervelli said.

The Jackson Hole News & Guide reported that in the following months the ground at Norris kept moving. Eventually it would move more than it had in the past 10 years.

Cervelli explained that the deformation at Norris was well below the surface and “not something that’s going to cause a surface hazard anytime soon.”

The movement at Norris ended up being reset by a 4.8 magnitude earthquake in April, the largest in 30 years.

Despite that, Cervelli said the earthquake was unremarkable.

“Really, it’s kind of what we expected,” he said. “Like the stock market, (the deformation) cannot just keep going. And eventually what we find is that it went down, and it went down really abruptly.”