California’s Department of Industrial Relations Director it taking a bit of umbrage with a study released last week that showed the state was ranked as the costliest for workers’ compensation.

Despite major workers’ comp reforms signed into law in 2012 California topped the 2014 Oregon Workers’ Compensation Premium Rate Ranking Summary, a list of average premiums paid by employers that the Oregon Department of Consumer and Business Services puts out every two years.

Premium rates in the report ranged from a low of 88 cents in North Dakota to $3.48 in California. Premiums paid were 61 cents lower Connecticut, the next state behind California. Oregon ranked 43rd, reportedly its best performance since the report was first put out in 1988.

The report was seized on by the Workers’ Compensation Action Network as an example of how tough it is to be an employer in California.

“Try as we might to reform California’s workers’ compensation system, employers here continue to bear the heaviest cost burden in the nation – by a wide margin,” WCAN spokesman Jerry Azevedo said the day the report was issued. 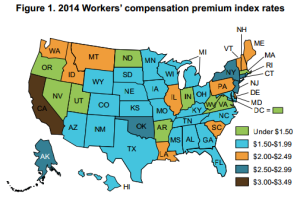 But on Monday DIR Director Christine Baker called out some issues she had with the study.

“It’s good for Oregon, but it isn’t fair to California,” Baker said.

A detailed reply to the study put out over by DIR notes the Oregon study has “inconsistencies and methodologies that skew the ranking.”

Baker said the report compares different occupational classes, and it fails to include adjustments resulting from the application of deductible plans or the return of policyholder dividends.

“It is such a completely different distribution,” she said, adding that the industrial mix and the size of California’s employment ranks are not comparable to other states in the study.

According to Jay Dotter, who put together the study, anyway you slice it the report doesn’t bode well for California’s workers’ comp system.

The report takes 50 business classes and compares losses over a three-year period.

“That’s going to vary a little bit state by state,” Dotter acknowledged. “But you can look at top 10 by payroll and you’re going to see the same top 10 (in terms of premium ranking) probably in every state.”

He added: “What that’s saying is the industry mix really doesn’t have that big of an effect on it.”

The highest payroll class examined was clerical office employees, which are a big part of the workforce in any state, according to Dotter.

“We are using the payroll to weight our premiums so we can add these all up and come up with an index rate that makes sense,” Dotter said.

Also not taken into account in the report are the reforms to California’s workers’ comp system ushered in by Senate Bill 863 in 2012, many of which have yet to take effect, Baker said.

Projections indicate that without SB 863, workers’ compensation costs would have spiked more sharply in 2013 and 2014, and that insurance prices had already begun to rise in 2012.

SB 863, which initiated an independent medical review and a utilization review process, has already had a positive impact on workers’ comp, according to DIR.

Medical expenses appear to be under better control, according to preliminary data from the Workers’ Compensation Insurance Rating Bureau of California. The data indicates that the estimated ultimate medical loss per lost-time claim is down 1.3 percent from accident year 2012 to 2013.

SB 863 also reduced ambulatory surgery center facility fees from 120 percent to 80 percent of Medicare’s hospital outpatient fee schedule, according to DIR, which stated the average amount paid per ASC episode in the first six months after the change in fee schedules was 26 percent lower than in the year before the change took effect.

Yet another aspect of SB 863 repealed the separate reimbursement for spinal hardware, after which the average amount paid per episode of the spinal surgery involving implantable hardware fell by 56 percent, according to DIR.

During the first year the filing fee was in effect, 213,092 liens were filed, down from 469,190 in 2011, a greater than 50 percent reduction, according to DIR, which estimates the lien filing fee is saving California employers and insurers $270 million per year in litigation and settlement costs.

“I think there are a lot of things happening at the same time,” Baker said of the ongoing SB 863 reforms. “We’re hearing from the judges that cases are settling a lot quicker. It will take time to balance all of this out. It will take another two to three years I think.”

Dotter acknowledged that the report, which looks at data up to Jan. 1, 2014, does not reflect SB 863 reforms.