Monsanto Co. said on Wednesday it reached a settlement with U.S. wheat farmers who sued the seed company over market disruption after unapproved genetically engineered wheat was discovered growing without oversight in Oregon.

Monsanto’s “Roundup Ready” wheat, which was never approved by U.S. regulators and which the company said it stopped testing a decade ago, was found growing in an Oregon farmer’s field in 2013. The company had said all the experimental grain was destroyed or stored away.

South Korea and Japan temporarily halted purchases of U.S. wheat after the announcement on fears the unapproved wheat, engineered to withstand Roundup herbicide, might have contaminated U.S. wheat supplies.

Monsanto did not admit liability, but agreed to pay $250,000 to wheat growers’ associations, including $100,000 to the National Wheat Foundation, and $50,000 each to the Washington Association of Wheat Growers, the Oregon Wheat Growers’ League and the Idaho Grain Producers’ Association. 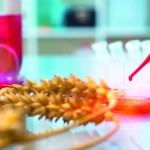 Monsanto will reimburse plaintiffs’ counsel for a portion of their out-of-pocket costs and fees associated with the litigation.

At least three class action lawsuits will be dismissed as part of the settlement, but the company said it does not resolve pending claims by growers of wheat other than the soft white variety.

Monsanto still faces scrutiny over its biotech wheat after the U.S. Department of Agriculture’s Animal and Plant Health Inspection Service said in September there had been a second discovery of unapproved Monsanto wheat. That wheat was found growing at a Montana State University research facility in Huntley, Montana, where field trials were conducted between 2000 and 2003.

There is no commercially approved genetically modified wheat, although Monsanto and several other companies are trying to develop biotech varieties of the grain.