They come in nearly every color scheme imaginable, from camouflage to bright pink. Most skiers and snowboarders on the slopes are wearing them, and if you’re not, well, you are not just reckless, you are . GASP! Unfashionable.

“Now I feel like if you go up to the mountain, it almost looks weird if you don’t have one on,” says Mikaela Costigan, accessories buyer for Powder House Ski & Snowboard in Bend, Ore.

Yes, helmets have been proven to reduce the chance of head injuries on the slopes, and they are now a common accessory among snowriders.

That was not always the case.

According to the National Ski Areas Association, 25 percent of skiers and snowboarders wore helmets during the 2002-03 season. That number was up to 67 percent for the 2011-12 season.

“They’ve come such a long way with the construction, the shape and the look of them,” Costigan says. “I think it’s a lot more comfortable for people to wear them. It’s one of those things, you wear it on a bike, you wear it on a motorcycle, so why wouldn’t you wear it when you’re skiing?” 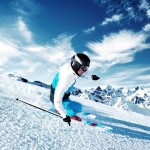 Coggin Hill, the freeride ski and snowboard director for the Bend-based Mt. Bachelor Sports Education Foundation, points to some high-profile incidents at ski resorts – including the death of Sonny Bono in 1998 after the famous recording artist struck a tree while skiing near South Lake Tahoe, California – as reasons helmet use is on the rise.

Moreover, Hill says, comfort, technology and convenience have helped make helmets mainstream on the slopes. Helmets help keep goggles and balaclavas intact when skiing or riding and can add warmth in addition to protection.

“For me, I think it’s more comfortable to wear a helmet,” Hill says. “If you crash or fall, you won’t lose your goggles and beanie. A helmet doesn’t come off. With the (lightweight) technology now, you don’t even notice you’re wearing a helmet. And with the music and the ear-pad speakers, people like riding with music. They’re a lot more convenient than they used to be. They even have Bluetooth now, so you don’t even need a cord.”

MBSEF requires all of its alpine ski racers and freeride skiers and snowboarders to wear helmets. Hill says that proper helmet fit is crucial. If a helmet is too big or a skier has too much material under it, the helmet can be rendered ineffective.

“It’s very important to get the right fit,” Hill says, adding that helmets should be sized at a ski shop. “They’re adjustable to a certain extent. We recommend wearing a thin balaclava under it.”

To deal with concussions, MBSEF requires baseline testing – computerized assessments that measure brain function – for most of its competition-level skiers and snowboarders, according to Hill. In the event of a concussion, the same test is taken again by the injured athlete, yielding comparative scores from before and after the injury to help determine when it is safe for the snowrider to return to action.

Also, when an MBSEF snowrider crashes and his or her helmet is cracked, that athlete is prohibited from continuing on the slopes that day, because the damaged helmet is no longer effective. (Most helmets are designed for a single impact, though some are now made for multiple impacts.)

“It’s not as prevalent as in a sport like football,” Hill says of concussions. “But it’s one of the injuries we deal with throughout the year.”

According to the NSAA, the use of helmets reduces the incidence of any head injury on the slopes by 30 to 50 percent, but the decrease in head injuries is generally limited to the less serious injuries. The NSAA further notes that there has been no significant reduction in fatalities over the past decade, even as the use of helmets has increased.

This suggests, according to a New York Times article last year, that some accidents occur at such a high velocity and with such force that helmets do not help in such incidences.

“This trend emphasizes the importance of not increasing risk-taking behavior simply because you are wearing a helmet,” notes a recent NSAA fact sheet. “Skiing and riding in control is essential in improving slope safety and reducing fatalities.”

A study published on www.hopkinsmedicine.org suggests that the use of helmets by skiers and snowboarders decreases the risk and severity of head injuries and saves lives.

The website says the findings “debunk long-held beliefs by some that the use of helmets gives athletes a false sense of security and promotes dangerous behavior that might increase injuries.”

Helmets range in cost from $60 to $220, averaging about $100, according to Costigan. Companies have started syncing helmets with goggles, matching colors and styles. Costigan says that kids often come into Powder House with their parents wanting a helmet for their birthday or for Christmas.

“A lot of parents wear helmets because they want their kids to wear helmets,” Costigan says. “They’re so comfortable, and they keep you so much warmer than a hat or a beanie would.”

Skiers and snowboarders ages 18 to 24 are the least likely to wear a helmet, according to the NSAA. In the 2011-12 season, 53 percent of 18- to 24-year-olds interviewed wore helmets on the slopes, compared with 91 percent of children 9 or younger.

“There’s some really good riders and athletes who do not wear helmets,” Hill says. “A lot of it is a personal-preference thing. I think it’s important to wear one all the time. Some people will choose not to if they’re just out cruising around. Wear it all the time if you want to be 100 percent safe, that’s what I would recommend.”