KCBS-Radio reported that Oakland fire fighters found an opened door when they arrived to put out the early morning blaze at Claremont Middle School, leading them to believe the fire was intentionally started. 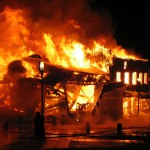 He says investigators have no suspects, and nobody was injured.

School officials say the building will have to be rebuilt.