A light rail train slammed into a car at a crossing in front of the University of Southern California, seriously injuring the driver and the train’s operator. Nineteen passengers on the train suffered lesser injuries.

The Metro Expo Line train was heading east toward downtown shortly before 11 a.m. Saturday when authorities said it appeared the car’s 21-year-old driver didn’t see it and tried to make a left turn across the tracks from a major thoroughfare.

The car, a silver Hyundai, was all but demolished. The first two of the train’s four cars slightly derailed, but they remained upright.

“We had to use the Jaws of Life to extricate the driver, and we transported him to a local hospital. He was in extremely critical condition,” fire Capt. Daniel Curry said at the scene. 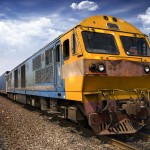 The train’s operator was taken to the hospital in serious condition, but his condition has improved, Metro spokesman Jose Ubaldo said.

Nineteen passengers on the train suffered lesser injuries, mainly cuts and bruises. “They were all able to walk off the train,” Curry said.

Eight were taken to hospitals, and the others were released.

The cause of the crash was under investigation. But Metro supervisor Diljiat Sandhu said it appeared that the car’s driver was attempting to turn left at a grade crossing and didn’t see the approaching train. What was left of the vehicle was still partly wedged onto the tracks Saturday afternoon.

The crash occurred in an area where Metro trains travel down the middle of Los Angeles’ Exposition Boulevard, with cars traveling east or west on either side. The passenger cars are covered with a bold black-and-yellow warning sign that reads: “Heads Up! Watch For Trains.”

On the north side of the boulevard is the USC campus, and on the south side is an entrance to Los Angeles’ Museum of Natural History. It appeared the driver attempted to cross at a small side street that dead-ends at a campus parking lot, officials said.

Police shut down several blocks of Exposition Boulevard while Metro worked to remove the train. Because the wreck was between two stations, passengers were asked to walk from one station to the next to continue their westbound or downtown-bound ride.

The agency hoped to have the full line opened by Saturday evening, Ubaldo said.

An estimated 90,000 people were expected to attend a sold-out soccer game at the nearby Los Angeles Memorial Coliseum on Saturday night. Ubaldo said that if service wasn’t restored in time to get riders there, shuttle buses would transport them from stations on either side of the venue.