Louis E. Jones had a reputation in the insurance industry as a common sense underwriter, and there were few contractors and home builders that he did not touch over the years, his friends say.

Jones started in the insurance business in the late 1950’s working for Brooks Randall Insurance. He then moved over to Al Barker Bonds, where he cut his teeth in the surety industry. 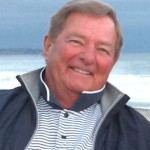 He founded Lou Jones & Associates in 1973, and built his surety agency into a household name with a reputation in the industry as a common sense underwriter.

Jones stepped down and turned his agency over to his son-in-law, Bill Shupper, in the late 1980’s. But he continued his love for buying and selling real estate.

Jones was also an avid golfer, and was a member of Oakmont Country Club and Desert Horizons Country Club for several years. In recent years he could be found daily holding court in the card room at Oakmont.