The approval of the Republican-controlled Colorado Senate came after an emotional debate about whether the measure would reduce shooting attacks or just invite lawsuits.

If the bill becomes law, Colorado would be among the only states to give express permission for victims to sue schools for negligence. Colorado currently includes schools among government entities that can’t be sued for negligence, a legal standard not all states follow.

“What is our goal with this bill? Moving our schools in the direction that provides increased safety for our kids with increased peace of mind for their parents,” said Senate President Bill Cadman, one of the bill’s sponsors. 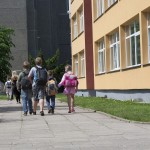 The bill is named for Claire Davis, killed at Arapahoe High School in a 2013 shooting by a fellow student who then turned the gun on himself. Davis’ parents have said the school ignored signs the shooter planned to kill fellow students and that schools should be liable for student safety.

“When the state of Colorado requires students to go to school … all of us have to understand that we do have a responsibility,” said Sen. Lucia Guzman, D-Denver.

Other lawmakers cited the 1999 shootings at Columbine High School, saying schools need to do more to prevent student violence.

The bill faces one more formal Senate vote before moving to the Democrat-led House, where it’s expected to pass. Colorado Gov. John Hickenlooper has not commented on the measure, but he generally signs bill that have bipartisan support.

Not all were sold on the liability attempt, though. Some Democrats questioned the legal standard for considering schools liable to violence.

“Is the school going to be liable because someone left the door unlocked?” asked Sen. Pat Steadman, D-Denver, who tried and failed to amend the bill to say schools would need to be guilty of “gross negligence” before damages could be awarded.

Another Democrat feared that schools would respond to the liability standard by expelling more problem kids.

“Do you further alienate them from the only social institution that is valuable in their lives, which is school?” asked Sen. Michael Johnston, D-Denver.

Republicans agreed to amend the bill so that schools couldn’t be found negligent simply by failing to expel or suspend a student. The bill was also amended to state that teachers or individual employees couldn’t be sued unless their actions were “willful and wanton,” a higher legal standard than negligence.

The bill caps damage awards at $350,000 per victim, for a total cap of $900,000 per incident. The bill originally would have been retroactive to allow the Davis family to collect damages, but the family has since settled with the Littleton Public Schools and the retroactive part of the bill has been changed.