A 70-year-old woman died and her husband suffered injuries when a landslide struck their vacation home on the central Oregon coast.

Officials say Dolores Miller died when the landslide struck the home near Florence at about 3:20 a.m. Friday.

Siuslaw Valley Fire and Rescue Marshal Sean Barrett said Miller had gone to let one of her two dogs out.

“Whether she opened the door or not we don’t know for sure what happened but she was in the area of the door and the husband heard a scream,” Barrett said. “He went to look and that’s when the mud was all in the house.”

Barrett said Gary Miller was able to get out of the house with the couple’s second dog and call for help. Emergency responders found Dolores Miller’s body and the body of the dog that wanted out. 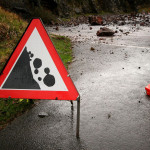 The Millers own Aloha Garbage, a garbage and recycling company in Aloha, near Portland. Neighbors said they arrived at their vacation home on Thursday evening.

Barrett said Gary Miller was taken to the main fire station where he was picked up by family members.

The landslide occurred in a neighborhood of about 60 homes called Mercer Lake Estates. The homeowner association’s treasurer, Lee Klein, has lived in the area for more than 40 years and said there’s no history of landslides.

However, the area has endured torrential rains this month.

“I can’t, still can’t believe it’s real,” said Jacque Corlett, a neighbor. “I’ve lived here 20 years. This is the first time this has ever happened.”

A state geologist planned to assess the stability of the area. The landslide knocked a second, unoccupied home off its foundation.

“This is not a normal area where a slide would happen,” Barrett said. “Somehow, some way, a spring or something changed course, came to this area which is not used to it and basically got between the hard rock and the dirt on top and brought it all down onto the homes.”