The Los Angeles area continues to be a drag on California’s overall workers’ compensation costs, according to a study out today from the Workers’ Compensation Insurance Rating Bureau.

The study, which controls for wage level differences and industrial mix, includes nine maps illustrating regional differences. Click here to be taken to a portal where the map can be downloaded.

Key findings of the study include: 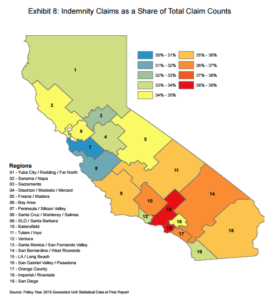 Even after controlling for wage level and industrial mix, significant differences among California regions were observed in the study.