A National Transportation Safety Board investigative hearing in Alaska next month on a fatal commercial airplane crash will be the first held outside of Washington, D.C., in nearly 20 years.

The board is conducting an investigative hearing Aug. 17 on an Oct. 2 crash that killed two pilots and a passenger near the village of Togiak in southwest Alaska. The flight was operated by Hageland Aviation Services, Inc., doing business as Ravn Connect.

The investigative hearing will be the first in Alaska since 1989 wreck of the Exxon Valdez in Prince William Sound.

Ravn Alaska spokesman William Walsh said the company constantly reviews and builds on its safety programs. “Ravn Alaska is being fully cooperative with the NTSB and its upcoming hearing,” he said in a statement.

The board will gather sworn testimony from subpoenaed witnesses, but it will not analyze or discuss the crash. The majority of witnesses are in Alaska, board member Earl Weener said in the announcement Tuesday. 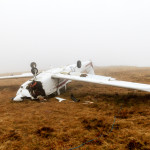 “We also believe that holding the hearing in Alaska will help increase awareness within the Alaskan aviation community of the issues surrounding controlled flight into terrain accidents and flight into instrument meteorological conditions,” he said.

Controlled flight into terrain refers to accidents in which an airworthy aircraft is flown by a pilot unintentionally into the ground, water or obstacles, usually with no prior awareness by the crew.

From 2008 to 2016, there have been 36 Alaska accidents involving controlled flight into terrain with 40 lives lost, Weener said. That’s in contrast to accidents that occur where the aircraft is out of control because of mechanical failure or pilot error.

The aircraft in the crash last year, a turbine-powered Cessna 208 B, took off from Bethel, landed in Quinhagak and took off again at 11:33 a.m. for Togiak. The plane crashed about 20 minutes later 12 miles (19 kilometers) northwest of Togiak on a steep, rocky mountainside.

The hearing will investigate operations and training at Hageland Aviation Services and its oversight by the Federal Aviation Administration.

Hageland Aviation aircraft were involved in six accidents since 2013, according to an NTSB review. Four involved controlled flight into terrain.

The NTSB in 2014 issued two safety recommendations asking the FAA to conduct audits of operators owned by the holding company HoTH Inc., which included Hageland Aviation.

The investigative hearing will begin at 8 a.m. Aug. 17 at the Captain Cook Hotel and is open to the public.