Attorneys representing more than 450 victims of the Oct. 1 Las Vegas mass shooting have filed lawsuits against the hotels where the shooting occurred.

Aziz and Pinkerton represent more than 450 victims of the shooting, including two wrongful death claimants.

The acts of the solo gunman, who killed almost 60 people and injured roughly 500 others when he fired into the crowd of a country music festival last month from his Mandalay Bay hotel room, have already resulted in multiple lawsuits. 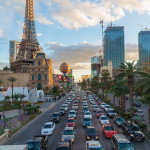 The legal team also represents the family of Kristina Staples, a wife and mother who was shot in the head. Staples remained in a coma for several weeks following the shooting. The fourth lawsuit was filed on behalf of 450 victims who were injured during the mass shooting. California attorney Allen Michel of Gipson Hoffman & Pancione is also part of the legal team.

Also filed on Monday was a fifth lawsuit on behalf of five victims represented by Aziz and Michelle Tuegel of Hunt & Tuegel, PLLC. One of these victims was 21-year old Paige Gasper who was shot on her right underarm, resulting in a lacerated liver and shattered ribs. The Gasper case has been transferred from Nevada to California by her legal team.