A federal judge who has emerged as a vocal critic of PG&E Corp.’s safety record, said the California utility giant has a “clear-cut pattern” of starting wildfires and needs “strong medicine” put in place before this year’s season begins.

U.S. District Judge William Alsup is overseeing PG&E’s probation for safety violations that led to felony convictions for the 2010 explosion of one of its gas pipelines, which killed eight people. He has proposed strict protocols for California’s largest power company following a series of massive fires along its 125,000 miles of power lines over the past two years.

“There’s a clear-cut pattern here: that PG&E is starting these fires,” Alsup told lawyers for the company at a hearing Wednesday in federal court in San Francisco. “Does the judge just turn a blind eye and say, ‘PG&E, continue business as usual, continue to kill people’?” 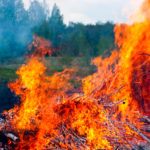 Alsup slammed PG&E just a day after the California power giant made a Chapter 11 filing, citing billions of dollars of liability from the blazes and creating the biggest U.S. utility bankruptcy ever. PG&E’s shares have plunged more than 70 percent and its credit has been downgraded to junk since November, when the deadliest fire in state history broke out in its territory. The $30 billion in liabilities the company faces threatens to affect everyone from the power generators that supply its power to the banks that back its bonds.

Alsup concluded Wednesday that PG&E violated its probation by not telling a court-appointed compliance monitor details about the investigation and resolution of the 2017 Honey fire, in which the utility avoided prosecution by agreeing to a $1.5 million fine. The judge said he’ll set a sentencing date for that later.

Among other suggestions, the judge proposed subjecting the company to criminal sanctions if it failed to shut off electric supply to portions of the grid on extremely windy days, trim tree branches and inspect and repair thousands of miles of power lines.

PG&E accepts trees are the leading cause of fires PG&E was found to have caused, the company’s lawyer, Kevin Orsini, said at the hearing. The utility “accepts the proposition that something more needs to be done,” Orsini said.

Alsup suggested an order requiring PG&E to trim more branches could help the company override resistance from landowners who Orsini said don’t want the company cutting trees. He also resisted the company’s assertion that there weren’t enough tree trimmers to implement the proposals.

“I don’t believe you’ve exhausted the supply of people who know what they’re doing,” Alsup said. The California Department of Forestry and Fire Protection, or CalFire, could lend its workers in the winter when it’s not fighting fires, Alsup said.

“We need strong medicine, come June 21, so we don’t have a repeat of the last two years,” Alsup said. “It has to be in place. It can’t be that we’re still talking about it.” He designated June 21 as the unofficial start of the wildfire season.

All eyes are on Alsup because while the Chapter 11 filing freezes and relegates lawsuits brought by victims of the wildfires, the judge is overseeing a criminal case unaffected by the restructuring. The judge said he’ll hold more hearings and is awaiting PG&E’s fire abatement plan due to regulators.

Alsup reminded PG&E of his authority to impose additional conditions of probation to prevent “criminal conduct.” He noted CalFire’s referral of 11 of the 2017 wildfires to county officials for criminal action, and suggested officials coordinate the most effective way to prosecute the company. He also said federal prosecutors might be best positioned to bring such a case.

“I think the public ought to know if PG&E committed criminal acts in these 11 cases in one month in 2017,” Alsup said.

The stock fell as much as 6 percent, touching an intraday low, and was down 2.3 percent to $13.67 at the close in New York. The case is important to investors of PG&E, whose shares are expected to continue trading for the duration of the company’s reorganization.

Alsup’s decisions will be a focus of regulators, ratepayers and Californians for whom the fires — burning thousands of acres, filling large swaths of sky with toxic smoke and claiming property and lost lives, are becoming an annual event.

Some experts have lauded him for taking on the role of “super regulator.” But in the days leading up to the bankruptcy, Alsup also drew pushback from regulators and the utility itself, which said his measures could cost as much as $150 billion.

“The goal of reducing ‘to zero the number of wildfires caused by PG&E in the 2019 season’ is noble but not practical,” the union said. Inspecting 2.3 million electrical distribution poles and 150,000 transmission structures across 125,000 miles of power lines by June, as Alsup suggested, “is not a realistic or pragmatic idea,” the union said. “In fact, it is not possible.”

Alsup scheduled the hearing to give PG&E a chance to argue against the judge’s fire safety measures as well as the probation issue. He heard from the California Public Utilities Commission, CalFire, federal prosecutors, the probation officer in the 2010 San Bruno pipeline explosion case and plaintiffs’ lawyers representing victims.