You control your own destiny.

That’s a cliche, but one would be hard-pressed to find a better way to summarize the mindset at EPG Insurance.

The Scottsdale, Ariz.-based firm has lately been rolling out a “future org” chart at meetings and showing people what their next step could be. 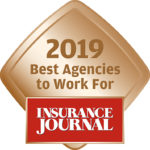 The chart is projected out five years, with the idea being that is what the firm may look like when it grows to that size, said Jeff Schmidt, an EPG principal.

That is among the many reasons a majority of the firm’s 24 employees took the time to fill out nomination forms for Insurance Journal’s Best Agency to Work For award. EPG was awarded Bronze in the West.

EPG, which reports annual revenues of $3.8 million, started the future organization chart about three months ago.

The chart is intended to show all employees, from those just starting out in customer service roles to top producers, that they have room to move up. Blank slots on the chart are left in several spots, including coveted posts – sales manager, chief financial officer, commercial lines manager – so people can envision their names going there some day.

“As soon as we did that, we had three or four people who called a meeting with us and said, ‘I want that role,'” Schmidt said. “It’s open for the taking. Whoever wants to elevate their game to that level can have that.”

The chart is among numerous initiatives the firm has recently undertaken to up its game under new operational strategies that are in part outlined in two books by business author Gino Wickman – Rocket Fuel, and Traction, according to Schmidt, who asked managers and employees to read the books awhile back.

To implement the strategies in an effective way, the firm holds quarterly offsite meetings to set goals, and they meet weekly for a few hours.

Schmidt calls EPG a “Christ-centered agency,” where “faith is the foundation of every decision we make.” Employees who nominated the firm as a Best Agency to Work For mentioned that, along with the firm’s willingness to help the community and contribute to charitable causes.

However, the ability to feel in control of their own destiny was an overwhelming favorite EPG attribute.

“We allow the employees to set their own goals at the beginning of each year in addition to the company goals that we set,” one employee wrote. “This allows them to feel in control of their own destiny. Basically, we say, ‘If you are looking for a pay increase or promotion, you know exactly the path to pursue to hit the goal.'”

Another employee liked that workers are viewed as much more than just a way to add revenue.

“I have worked in a fair share of industries the last few years and EPG holds the standards high for the way they take care of the employees who work here,” the employee wrote. “Especially in the insurance industry, I have yet to hear about a company that takes better care of their employees and their revenue than EPG Insurance. Most businesses are all about numbers, and even though numbers are highly important, what I appreciate the most about this company is that they don’t make it seem that numbers are what their prime focus is, and I think that is also what helps fuel the overall success of this agency.”

Another employee noted that the agency takes advantage of “the positive reinforcement factor” by offering team-building social activities and workshops.

“We are not a huge corporate office, and the company size definitely helps with everyone being willing to work together,” the employee wrote. “Overall, I’ve been here a little over a year, and not once have I felt the stress that one has when they go into work and truly hate their job. I’ve felt that stress, but never at EPG Insurance.”

Schmidt stressed the importance of being a team, getting everyone to know their roles and to look for ways to improve themselves.

“It’s just a really cohesive team of people and everybody knows exactly what is expected of them and everybody’s rowing in the same direction,” Schmidt said.