California is typically the first place that comes to mind when one thinks of earthquake activity in the U.S. In recent years, however, the central U.S. – especially Oklahoma, northern Texas and southern Kansas – has been getting more and more attention because of the rapid increase in earthquake activity. In fact, Oklahoma went from being a region of relatively low seismic activity to the state with the highest number of earthquakes per year nationwide in less than a decade. The number of earthquakes at magnitude 2.0 or higher that have occurred in Oklahoma this year is nearly four times greater than California1, with Oklahoma experiencing 528 earthquakes of magnitude 3.0 or higher compared with 169 in California1 as of October 6. This rapid increase in the number of earthquakes in Oklahoma and surrounding areas is highly correlated with oil and gas exploration, specifically the deep injection of waste fluid, a byproduct of the hydraulic fracturing process, commonly referred to as fracking. 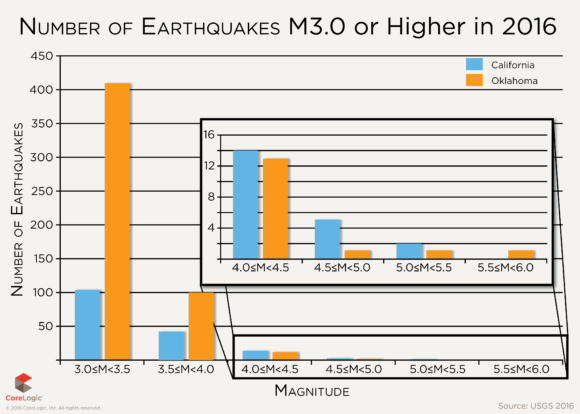 It has been difficult to quantify this new hazard trend in Oklahoma since it is rapidly changing with an increasing number of earthquakes occurring year over year, which does not fit with the historical record that shows a consistently low rate of earthquakes for decades prior to the surge. As such, the USGS has developed an independent, short-term view of earthquake hazard specifically related to man-made, or induced, seismic activity3. This new study has led some to believe that earthquake hazard in Oklahoma is the highest in the nation.

While the majority of earthquakes that have occurred in Oklahoma continue to be small-to-moderate and non-damaging events, the threat of a larger, damaging earthquake remains. On September 3, 2016, residents of Oklahoma, Kansas and Texas were startled awake by the largest earthquake in Oklahoma’s history4 (Figure 2). At magnitude 5.8, this earthquake is also the largest to occur in the U.S. since the 2014 South Napa earthquake in California. 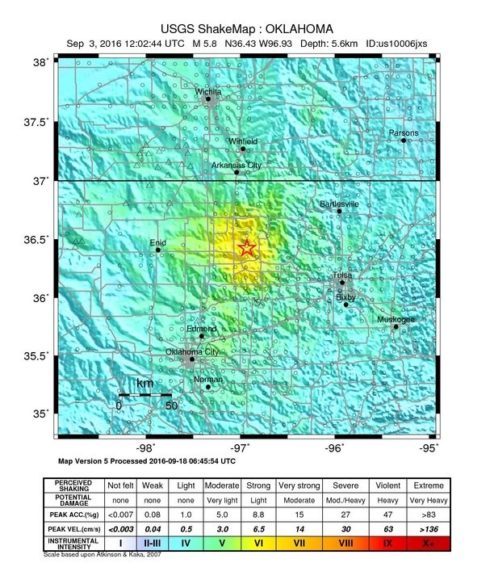 Source: http://earthquake.usgs.gov/earthquakes/eventpage/us10006jxs#shakemap1
In order to understand how serious the recent spike in earthquake activity is, it is important to look at the rate of past earthquakes. Using data from the USGS, Figure 3 shows the rapid change in the rate of earthquakes in Oklahoma compared to California since 1970. Overall, there have been 19,480 earthquakes of magnitude 3.0 or higher in California compared with 2,299 earthquakes of the same magnitude in Oklahoma. The number of earthquakes in California has remained relatively constant over time, with the exception of years when a major earthquake occurred and the rate of earthquakes increased due to aftershocks following the event. On the other hand, Oklahoma experienced very low earthquake activity until 2009 when the rate began to rapidly increase. This increase is believed to correlate with increased oil and gas activity, specifically the pumping of waste water at fluid injection wells5.

Figure 3: Number of Earthquakes M3.0 or Higher Per Year in California and Oklahoma 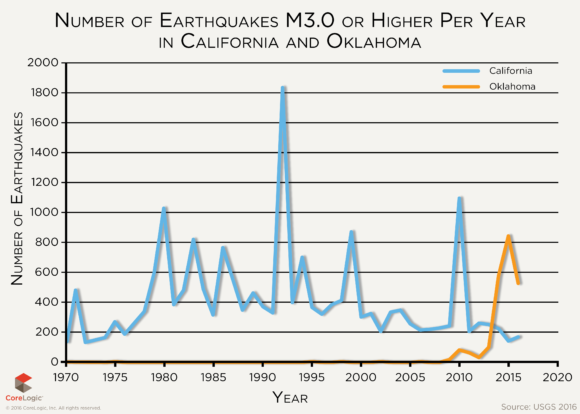 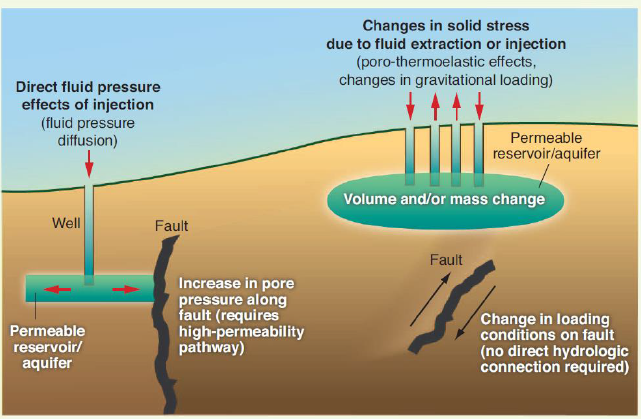 As the number of earthquakes in Oklahoma continues to rise and the impact of the September 3 magnitude 5.8 earthquake is still fresh in the minds of many, there is a growing concern about the increased risk of induced seismicity. In general, the most frequent earthquake events are relatively small – mostly less than magnitude 4.0 – and would not be expected to cause damage. However, it is unknown how large and potentially damaging these earthquakes could become. In its 2016 report, the USGS indicates that it is possible for a larger, more damaging, earthquake to be triggered.

While the current rate of earthquakes is highest in Oklahoma and the short-term view of this hazard ranks the state with the highest hazard in the country, it is important to remember the long-term view of earthquake hazard and the population exposed to its threat. With its history of large damaging earthquakes and large populations exposed to the hazard, California still remains the top-ranked state for overall earthquake risk.

How Costs for Obesity in Workplace Vary by Industry