As hurricane Harvey made landfall north of Corpus Christi last week, this Category 4 hurricane left devastation in its wake. CoreLogic® estimates that the total residential insured and uninsured flood loss for Hurricane Harvey is between $25 Billion and $37 billion. In the days before making landfall, the hurricane rapidly intensified, transforming itself from a small tropical storm of little concern, to now, what we consider to be one of the most devastating hurricanes to hit the United States. Yet, the real characteristic that sets Hurricane Harvey apart from other hurricanes is the unprecedented flooding that resulted, with record setting rainfall reaching upwards of 50 inches in a single location. Subsequently, the enormous geographic breadth of the flood area is beyond comparison to any recent hurricane or flood event in the U.S. CoreLogic analysis estimates that 70 percent of the flood damage from Hurricane Harvey is uninsured, highlighting an insurance gap that leaves many of those impacted uninsured. 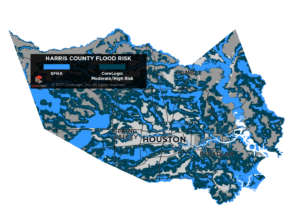 Naturally occurring catastrophic events can be tipping-point events, where a failure in one area can quickly cascade into interconnected failures. We cannot control the timing of low-probability catastrophes (and the rare occurrence of more than one event in a short period, such as Hurricane Irma on the heels of Hurricane Harvey, making landfall in the continental United States) of this severity but can improve our ability to respond, and subsequently rebuild. Having a comprehensive and granular understanding of risk powered by data and analytics is critical to that. We look to do this through improvements gained largely though the maintenance of better insurance exposure data sets, and the introduction and acceptance of catastrophe risk loss models that can simulate the occurrence of large catastrophic events. In 1992 when Hurricane Andrew made landfall, it took months for the government and insurance industry to accurately quantify the losses from this event and this delay increased the losses in both financial and human terms. However, in the wake of Hurricane Katrina, the loss severity was rapidly assessed, quickly putting into motion large scale government and private restoration efforts. In short, as bad as the effects were from Hurricane Katrina, they could have been significantly worse.

The widespread flooding from Hurricane Harvey, caused by storm surge and inland flooding, highlights the challenge of flood risk to properties in the United States. Since we cannot influence the timing and severity of natural catastrophes, we need to focus on resilience – our collective ability to rebuild and restart businesses and lives. Insurance is an important part of our resilience because insurance provides the funds necessary to restore the damage to capital from these events. Hurricane risk modeling became accepted after Hurricane Andrew highlighted weaknesses in our ability to respond to large urban catastrophes, and this adoption has led to faster restoration of lives and livelihoods after hurricanes. Flood risk modeling is a much more complex data and analytic challenge than hurricane risk modeling, but the greater availability of location data sets and grid computing in 2017 have improved our ability to respond to flood disasters. If we characterize the last phase of risk resilience improvement as the era of catastrophe modeling data and analytics, the next era will be known as the era of big data and grid-computing analytics. And one where we began to actively manage flood risk in the United States.