CoreLogic® analyzes and evaluates the number and severity of natural hazard events that occur across the U.S. in its Natural Hazard Risk Summary and Analysis in order to help inform and protect homeowners and businesses from financial catastrophe. The annual report reviews hazard activity for flooding, earthquake, wildfire, wind, hail, tornado and hurricanes, with spotlights on specific international events.

The CoreLogic data shows relatively average activity for most U.S. natural hazards in 2017 with the exception of wildfires in California and flooding as a result of Hurricanes Harvey and Irma. A snapshot of the data includes:

California and the Midwest also experienced significant rainfall that resulted in flooding. According to the National Centers for Environmental Information (NCEI), total property loss from the California winter floods is estimated at $1.5 billion and total property loss from the Midwest (between Oklahoma and Ohio) April/May flooding is estimated at $1.7 billion.

Overall, Hurricane activity in the Atlantic was higher than average in 2017 with 17 named storms, 10 hurricanes and six major hurricanes, which are identified as Category 3 or greater.

The 10 most destructive wildfires in 2017, in terms of structures destroyed, were in California and include: 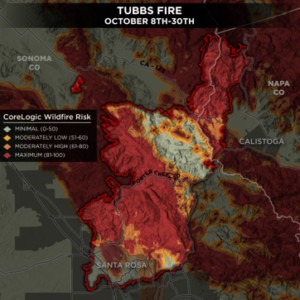 To learn more about the various perils that impacted the U.S. in 2017, view the full report here.