Examining the Risk in French Gulch and Redding

Less than a year ago, California was ablaze with some of the most catastrophic fires the United States has seen. Over 10 million acres burned, and many homes and lives were lost. Seven months later and wildland fires have again made the news both in California and nationally.

The 2018 California wildfire season is shaping up to continue at the same pace of fire generation seen in the last five years. Through July 29, Cal Fire reports 3,770 fires compared to 3,440 we saw at this time in 2017, and the burned acreage parallels that as well, with 292 thousand acres burned this year thus far compared to the 219 thousand at this time last year. With fires burning across Northern California and even a few in Texas this early in the year, 2018 is looking an awful lot like 2017.

As of July 29, Cal Fire[1] is reporting 16 active fires within their jurisdiction with the Carr Fire outside the city of Redding presenting the current greatest risk to populated areas. It has primarily affected French Gulch, a small community to the west of Redding. So far, these fires have taken 6 lives.

The CoreLogic housing inventory quantifies the rural nature of this community but also highlights the risks should the wind direction changes and cause the wildfires to spread eastward towards Redding. The table below highlights the amount of homes at each risk level in the threatened counties as well as their associated dollar value for reconstruction. 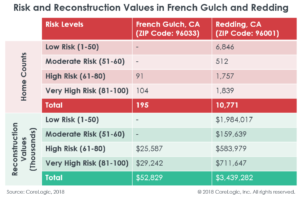 Figure 1: The risk levels in this table are based on 4 basic variables which can greatly tip the scales one way or another in terms of risk: 1) the slope/elevation of a home, 2) the cardinal direction the slope faces, 3) the amount and type of vegetation available as fuel in the area, and 4) the area’s burn history.

These are big numbers, but to put this into perspective, the 2017 wildfires reconstruction costs were around $10 billion. Still, it’s uncommon to see wildfires this early, and only time can tell what this means for the season to come.

CoreLogic is monitoring the wildfire in French Gulch, California and will provide updates as the situation progresses. To keep an eye out, please visit Hazard HQ.