Comparing S&P’s data with the National Flood Insurance Program’s written premium in force, as reported in January 2018 by the Federal Emergency Management Agency, private cover now represents nearly 15 percent of all flood premiums nationwide. There was $623.8 million of private flood insurance written in 2017, up from $412.6 million in 2016. By contrast, the NFIP had $3.57 billion of in-force premium as of January.

The news comes as Congress continues to mull reforms to the NFIP that could clear the way for a bigger private market role in the nation’s flood preparedness system. Under legislation passed by the U.S. House in November, deference would be given to state insurance regulators to determine which privately underwritten policies are comparable to NFIP coverage for purposes of federal lending regulations. The measure also would remove mandatory purchase requirements for commercial properties and deny NFIP coverage for extreme repetitive loss properties whose owners refuse to implement flood-mitigation measures.

The U.S. Senate has yet to take up legislation to reform and extend the program, whose statutory authorization will expire March 23 without further action by Congress.

The S&P data stem from statutory filings made to state regulators and the National Association of Insurance Commissioners. The figures include both residential and commercial policies, and coverage written in both the admitted and excess and surplus lines markets.

Because the NAIC only began collecting data on private flood in 2016, this year’s figures offer the first opportunity to compare how the still nascent market is developing on a year-to-year basis. Florida, which created an innovative regulatory framework for standalone flood coverage in 2014 and built on that framework in 2017, surpassed California last year to become the largest market for private flood insurance. It was already the largest market for the NFIP. 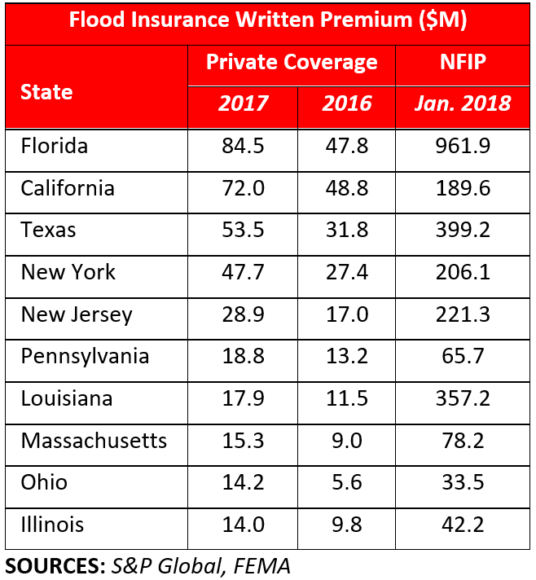 Private flood premiums grew by at least double-digits in 2017 in every state but Maine, where the market actually declined by 3.9 percent from 2016. The largest markets tended also show the most growth on a premium dollar basis. On a percentage basis, the private market grew rapidly from a relatively small base in a number of states, including five where 2017 premiums more than doubled the 2016 total. 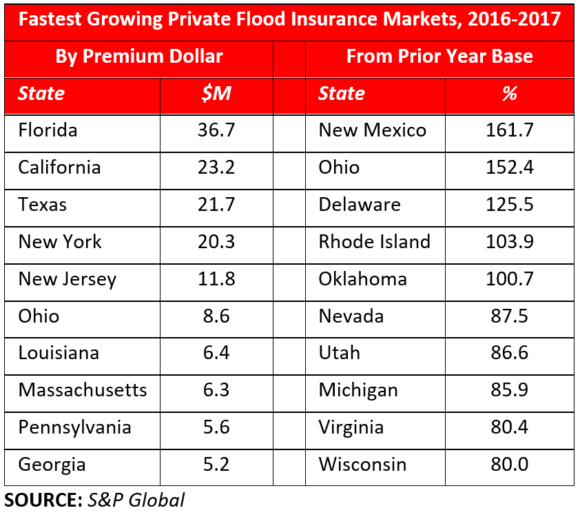 Not only is the private flood insurance market getting bigger, but it’s also growing more competitive, as measured by the Herfindahl-Hirschman Index (HHI). The U.S. Justice Department (DOJ) and the Federal Trade Commission (FTC) use the HHI, calculated by summing the squares of the market-share totals of every firm in the market, to assess the degree to which markets are subject to monopolistic concentration. The DOJ and FTC generally consider markets in which the HHI is between 1,500 and 2,500 points to be “moderately concentrated,” while those in excess of 2,500 points are “highly concentrated.”

Taken as a whole, the nationwide HHI of the private flood insurance market improved from 3,438.4 to 2,266.4, thus moving from “highly concentrated” to just “moderately concentrated.” But the improvement is even more impressive at the state level. In 2016, every state but one (New York, with an HHI of 2,471.4) had private flood markets that fell in the “highly concentrated” range. In 2017, by contrast, there were 20 states that fell in the “moderately concentrated” range and one (Alabama, with an HHI of 1,484.4) whose score indicates a competitive market. States seeing the most rapid improvement in their market concentrations were New Hampshire, Illinois, Colorado, Missouri and Washington, each of which improved their HHIs by more than 3,000 points from 2016.

In concert with growing more competitive, the private flood market also was far less profitable in 2017 than it had been in 2016. In fact, taken as a whole, the industry’s losses exceeded its premiums, with a nationwide loss ratio of 167.0, compared with a loss ratio of just 38.2 in 2016. At the state level, loss ratios ticked up in all but 12 states, and rose by 10 or more points in 19 of them. Whereas 2016 saw 32 states with exceedingly low loss ratios of 3.0 or less, there were only seven such states in 2017. 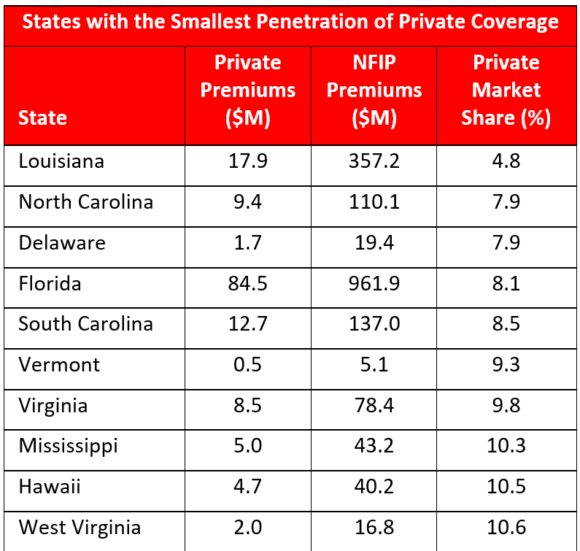 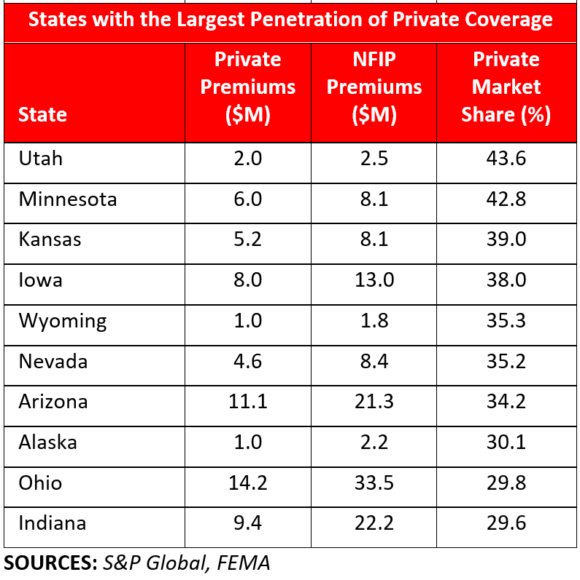 All of which is to say that, though still small relative to the federal program, the private flood market is maturing quickly and is now paying real claims. In the District of Columbia, it’s already the case that the majority of flood cover, 65.9 percent, is privately underwritten.

There also are real opportunities for future expansion, particularly if Congress provides the needed clarity on which policies satisfy federal lending standards. As it stands now, Louisiana has the smallest penetration of private coverage as a percentage of the overall flood market, at just 4.8 percent. Even in Florida and Texas—which have, respectively, the largest and third-largest private markets in the country—the private market only accounts for, respectively, 8.4 and 11.8 percent of the overall flood market. Yet a recent study by the actuarial firm Milliman finds that 69 percent of Louisiana property owners, 77 percent of Florida property owners and 92 percent of Texas property owners could find more affordable options in the private market than through the NFIP.

Critics of the private flood insurance tend to cite fears that insurers will “cherry pick” the NFIP of relatively low-risk policies, leaving the program—already more than $20 billion in debt—even further destabilized than it already is. This is mistaken on a few fronts. For one, the NFIP already functions as a high-risk pool, comprised largely of properties that are required to buy coverage because they lie in special flood hazard areas. There are precious few “cherries” to pick.

For another, insurers are more than willing to take on even the riskiest of those high-risk properties. The same Milliman study found that, even within the highest-risk “V” coastal zones, 62 percent of Florida homes, 85 percent of Louisiana homes and 88 percent of Texas homes could see lower premiums in the private market. This also was the pattern seen with the “depopulation” efforts undertaken by Florida’s Citizens Property Insurance Corp. The state-backed property insurer is now less than half the size it was a few years ago, specifically because private insurers were interested in taking out high-risk and low-risk properties alike.

But perhaps most importantly, the combination of rising sea levels and unchecked coastal development make clear that the universe of properties that will need flood insurance is far, far larger than the 5 million policies written by the NFIP today. According to an alarming study conducted by researchers from the U.S. Environmental Protection Agency, Nature Conservancy and the University of Bristol and published in February in the journal Environmental Research Letters, nearly 41 million Americans already live in 100-year floodplains, or roughly three times as many as current FEMA maps show.

In a recent visit to Miami Beach, NFIP Administrator Roy Wright laid out a “moonshot” plan to double the program’s enrollment over the next five years, which is a start, but wouldn’t even cover all of the 13 million Americans FEMA already projects to be at elevated risk. To truly close the protection gap, we’ll need to deploy the awesome might of the private insurance industry’s marketing machine – talking lizards, snappy jingles and all the rest.