It took the threat of a ballot initiative to make it happen, but the deal no one ever thought they would see has come to fruition: Michigan’s lawmakers have passed legislation to reform the state’s worst-in-the-nation auto insurance market.

Capping those unlimited lifetime benefits had long been a third rail of Michigan politics. While the system’s spiraling costs led to the nation’s highest average auto insurance premiums – most recently estimated at $2,611 a year, more than double the averages in neighboring states like Indiana ($1,181), $1,175 in Ohio ($1,175) and Wisconsin ($951) – in session after session, a cadre of powerful special interests like hospitals, trial attorneys and health insurers repeatedly batted down any attempts at reform.

But facing the prospect of a looming ballot referendum financed by Detroit billionaire Dan Gilbert that could take the decision out of lawmakers’ hands, the Republican-led Legislature and Democratic Gov. Gretchen Whitmer reached bipartisan compromise on a set of reforms, some of which R Street has been proposing for as long as we’ve been in existence. Whitmer has promised to sign the legislation shortly.

First and most significantly, auto insurance consumers in Michigan will now be able to choose among a variety of levels of PIP coverage. They can keep unlimited coverage or buy limits of up to $500,000, $250,000 or $50,000. Those with Medicare or private health insurance that covers collision injuries would even be permitted to opt out of PIP entirely, while those enrolled in the state’s Medicaid program would be required to purchase at least $50,000 of PIP coverage.

Such caps hold out promise that loss ratios in Michigan’s PIP market might eventually come into line with the rest of the country, where no other state has a coverage limit of greater than $50,000. 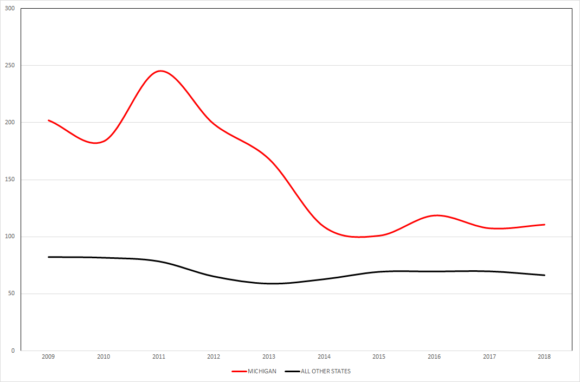 The state will also shift from a file-and-use to prior-approval rate review system, with the director of the state Department of Insurance and Financial Services granted some discretion to accept rates that exceed the mandatory rollbacks where such rates are needed to avoid solvency concerns.

Michigan’s auto insurers also will have to contend with massive reductions in underwriting and rate-setting flexibility. That includes a bar on the use of gender, credit score, ZIP code, occupation, marital status and homeownership status in setting insurance rates. Insurers could still consider “territory” and an applicant’s “insurance score,” though the precise contours of what those permissible rating factors might entail are yet to be determined.

Finally, it would gradually phase out the Michigan Catastrophic Claims Association, the state-backed reinsurer that historically has financed catastrophic PIP claims. All policies would continue to be charged a basic fee of $43 to support the association’s existing obligations, while only those policies that maintain unlimited coverage would be charged more for new claims.

How this massive set of changes will play out in the market remains to be seen. The package state lawmakers agree to could not, in any universe, be described as a free-market paradise. But what Michiganders faced in their auto insurance market was undoubtedly a crisis that required bold action. For finally addressing the core source of the problem, the Legislature and Gov. Whitmer deserve a round of applause.