Max, Bella and their canine comrades cause more than one-third of all home insurance claims, adding $530 million a year to insurance costs.

And while the number of claims is down, the cost of the average claim from dog bites and other injuries is on the rise, according to the Insurance Information Institute (I.I.I.) and State Farm, the nation’ largest writer of homeowners insurance.

The average cost per claim nationally has risen more than 67 percent from 2003 to 2014, due to increased medical costs as well as the size of settlements, judgments and jury awards given to plaintiffs, which are still on the upswing, according to Loretta Worters, vice president with the I.I.I.

The trend in higher costs per claim is attributable not simply to dog bites but also to dogs knocking down children, cyclists and senior citizens — all of which I.I.I. says can result in fractures and other injuries that increase the severity of the losses.

Experts say that even normally docile dogs may bite when they are frightened or when defending their puppies, owners or food. The most dangerous dogs are those that suffer from poor training, irresponsible owners and breeding practices that foster viciousness.

“All dogs have the potential to bite, but for most, biting is a last resort,” said Victoria Stilwell, star of Animal Planet’s TV series, It’s Me or the Dog. “If time is taken to raise, teach and socialize a dog correctly, the likelihood of a bite incident occurring is extremely low. Confident dogs have less need to use aggressive behavior.”

Victims and homeowners insurers are not the only ones paying for dog bites. Workers’ compensation for the United States Postal Service (USPS) costs about $3.7 billion a year. Dog bites are the most common cause of injury for walking postal workers. 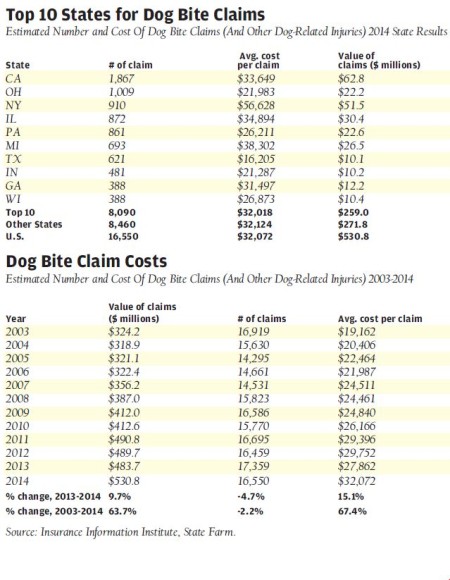