Across America, the tides are turning in favor of the cannabis industry. While the federal government continues its policy of prohibition, most U.S. states have legalized cannabis to some extent. This rapid shift has created an explosion of revenue in the cannabis sector. Publicly released tax revenue data from the states of Colorado, Washington, and Oregon demonstrate that the industry is growing exponentially.

This growth will reignite in 2018 when California’s recreational law takes effect. The limited data shows that just one sector of the industry is a multibillion dollar opportunity, and retail sales do not include growers, processors, transporters or laboratories. By 2021, the total economic impact of cannabis is estimated to exceed $20 billion nationwide.

Due to federal prohibition, the insurance market continues to fail the cannabis industry. By far, the biggest insurance challenge facing cannabis companies is securing insurance that insures cannabis operations. Carriers frequently challenge coverage for claims arising out of cannabis-related losses, and courts often side with carriers. This holds true regardless of whether the cannabis company is operating legally within the state’s cannabis laws or not. A large and growing body of case law supports the position that because the object of the insurance contract is illegal, a carrier may deny coverage for a cannabis business.

This justification has been used to deny coverage for landlords who lease their premises to cannabis companies. Presumably, this justification would be a strong weapon in denying coverage to doctors who file malpractice claims for damages related to prescribing medical cannabis.

At least one court in Arizona held that because cannabis is illegal at the federal level, all contracts executed by a cannabis company are null and void. This sweeping holding applies to purchase sale agreements, employment contracts, and, of course, insurance contracts.

Judges are generally split as to whether insurance contracts for cannabis coverage are valid.

Tracy v. USAA generally held that although a homeowner was legally growing marijuana in his home pursuant to state law, coverage was properly denied because the contract was contrary to public policy. On the other hand, Green Earth Wellness Center, LLC v. Atain Specialty Insurance arrived at the exact opposite result and upheld coverage based on the ambiguity of cannabis law between state and federal court. While Green Earth has had a handful of cases following its reasoning, a schism remains in federal court and is unlikely to be resolved by Congress or the Supreme Court in the foreseeable future.

Captive insurance is formalized self-insurance. The concept has been around for decades and generally involves a situation where an insured determines that it can self-fund its risk management more efficiently than market solutions. Almost every Fortune 500 company has a captive insurance company, and the concept is rapidly spreading through the middle market. Agents and brokers should be aware of how captive insurance can be used to provide a profitable solution to the cannabis industry’s risk management problem.

The McCarran-Ferguson Act, passed in 1945, enshrined the precept that insurance is the business of the states. The licensing, regulation and execution of insurance laws is a plenary power of the states. With the notable exception of healthcare, this doctrine has been undisturbed for decades. 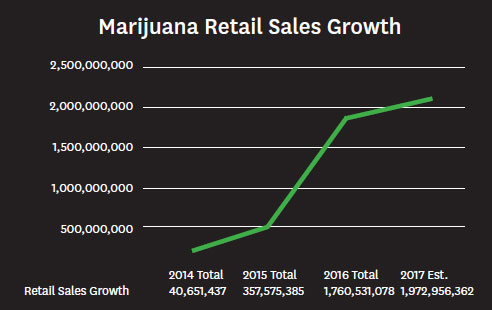 The Controlled Substances Act (CSA) prohibits the possession, production or use of cannabis. So, is there an issue with a state issuing an insurance license to a cannabis captive?

The answer is no. The CSA specifically provides that states are free to pass their own laws regarding cannabis, so long as states’ laws do not create a “positive conflict” with federal law. The term “positive conflict” has been narrowly interpreted by the U.S. Supreme Court. In fact, the Supreme Court’s narrow treatment of this phrase is the chief reason why the Department of Justice declines to prosecute state decriminalization laws — the DOJ would lose.

While the legal field is complex, the issues can be narrowed. States possess the power to issue insurance licenses regardless of the federal government’s opinion of the insured. The CSA prohibits marijuana, but permits states to regulate the field so long as states’ laws do not create a conflict with the goals of Congress. The mere issuance of a cannabis captive insurance license does not impair Congress’ goal of preventing the cultivation, use or possession of cannabis. Consequently, the states may license a cannabis captive.

However, the power to regulate insurance rests with the states. This means that states may either license or decline to license cannabis captives. Most state insurance departments decline because many insurance commissioners prefer not to invite controversy to their department. Others simply do not want cannabis affiliated with their states. Only a handful of domiciles are available for cannabis captives.

Two of the largest cannabis markets, Washington and California, do not have captive insurance laws. Captive insurance companies may only be licensed in states with captive insurance legislation permitting their existence. As a result, many prospects for cannabis captives may have to incorporate their cannabis captives in foreign domiciles. This results in the captive being treated as a nonadmitted insured in the state in which the risks are located. This raises the issue of procurement taxes (also called direct procurement or direct placement, depending on the jurisdiction).

The rules regulating procurement taxes vary by state. Washington, taking a potentially unconstitutional position, maintains that no individual may purchase insurance from an unauthorized, unlicensed insurer. These procurement issues are generally resolved by paying the state the procurement tax fee. However, Washington’s prohibition requires any cannabis captive insuring Washington residents to use a fronting company. This adds additional costs to operating the captive.

These hurdles are common legal issues encountered by qualified captive managers every day. Thus, the real issue for brokers and agents is not whether cannabis captives are legal, but whether they make sense for the insured.

When Is a Captive Ideal?

In general, captive insurance is ideal in situations where the market fails the insureds. Where insurance is too expensive, fails to cover proper risks, or is simply unavailable, insurance professionals should be aware of the potential value of captive insurance. Ideal candidates include cannabis companies with positive cash flow, relatively few claims and strong risk management practices. Companies require capital to establish their own captives, and the more risk assumed by the captive, then the more capital necessary to fund the reserves.

Additionally, captive insurance companies should ideally insure multiple entities. The IRS would prefer large numbers of insured entities to secure proper risk distribution. While captive professionals differ on the precise number of insured entities necessary to form a captive, the model is better suited for middle-market companies with large operations. If a captive is not a good fit for an individual operation, then several cannabis companies can pool their resources to form a group captive. A full analysis of risk distribution and the ways to structure a captive are beyond the scope of this article, but competent captive managers have multiple solutions to bring to the analysis.

Agents and brokers should be wary of the risks placed into the captive. The most common risks should include general liability and property insurance. However, there is case law indicating that a cannabis captive may insure against criminal liability, which is a potential lifesaver in the event of a federal raid. Landlords renting to cannabis companies may want to consider self-insuring their property risks through a captive because carriers have an enviable track of wins against insureds on those grounds. Finally, doctors prescribing medical marijuana should consider captives to cover gaps in their malpractice coverage. Many malpractice carriers are likely to deny coverage in the event of a loss related to the prescription of cannabis.