Young agents don’t always feel supported by their elder peers. They say training is sometimes lacking for newbies in the agency world. They don’t see enough diversity in leadership. And they continue to say that technology inside the industry lags well behind others.

However, the young professionals that do make their way to the agency world love the opportunities a career provides. They love the freedom, flexibility and even the day-to-day challenges that come with their jobs. Most would recommend the job to other young people, too.

That’s according to Insurance Journal’s 2019 Young Agents Survey, which asks young agents for their opinions on the industry, their agencies and their careers as an independent agent.

Some 86% of young agents, those who are 40 years or younger, report they consider their job to be a permanent career choice and 84% would recommend it as a career choice to another young person, the survey revealed. But there are some things young agents want to change.

“I’d love to see the more seasoned / senior level members try and reach out to employees under 40; see what the pain points are and to gain perspective,” one survey respondent wrote. “A lot of what I’ve experienced has been ‘…this is how we’ve always done things.’ I think it’d be a breath of fresh air for upper management to not only let [the] younger generation try their hands at leading, but to foster and grow these junior members.”

Another young agent wrote: “I would like to see less ‘looking down’ upon in regard to younger agents. Some older agents may not intentionally condescend younger agents, but it is a big challenge in gaining trust of clients and shouldn’t be an even bigger challenge to gain trust/respect from their co-workers.”

The survey also found that young agents would like to see more people that look like themselves in leadership roles. That includes diversity in ethnicity and gender, and seeing younger leaders in various roles.

While more than one-third of young agents responding to the Insurance Journal survey were female, less than 15% were from ethnic backgrounds considered non-white or Caucasian. Of the total respondents, just 5.9% were Hispanic/Latino, 3.8% were Black; 2.5% identified as Asian; and less than 1% noted they were from Native American descent.

“I would love to see more people that look like me in leadership positions,” wrote one young Latino/Hispanic agent in the survey.

One agent said if they could change the insurance world it would be by adding more female owners. Another added they would like to see more female agents, too. 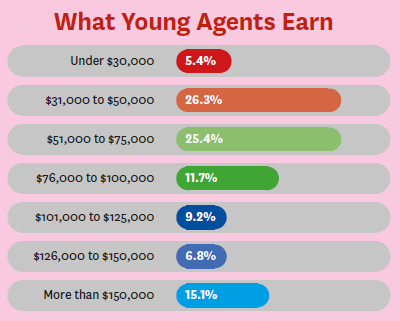 Young agents also believe technology is an area that could use some improvement.

“Technology has to improve, and the industry can’t be so slow to respond to changes in the world,” one said.

One respondent complained about too many tech systems not working together. “I’d love to see a system created for the full independent agency experience. There should be a way to streamline everything under one system, not merge 10 different systems together to make it work,” the young agent wrote.

“I wish it was WAAAYYY more techy. I went to school for IT and it (insurance) is light years behind,” another young agent explained.

For 30-year-old Jeffrey Sanders, a client advisor at Gulfshore Insurance in Naples, Florida, the agency’s training program solidified his decision to join the agency after a previous career in the hospitality industry managing private golf clubs.

Two years ago, Sanders decided to make a career change. “In the hospitality industry, you work every weekend, you work every holiday and that can be tough as I started looking forward to starting a family and getting married,” he said.

He began exploring other careers that he thought would maybe suit his “people” skillset. “It came down to really two career paths for me, either private wealth management or insurance,” he said.

Gulfshore had made a few hires in the past that just hadn’t worked out, Sanders explained. “So I think they were looking to do something a little bit different and really invest in the young agents they were going to bring in.” That meant creating a pilot training program and Sanders was one of the first to go through it. 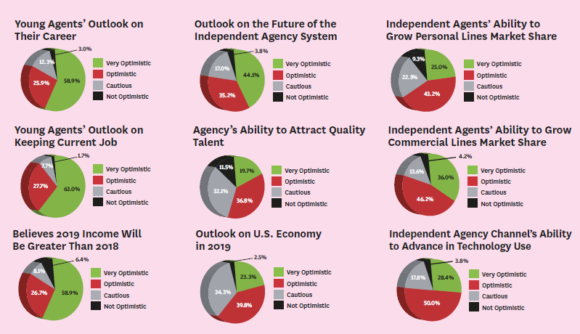 Gulfshore paired Sanders up with a senior partner at the agency. But not just any partner — a partner who ended up being the ideal fit for Sanders. “He’s a bit of a younger guy,” he said, just 38 years old (now 40). “He’s still actively selling, not sitting behind the desk all day and just letting business come to him. He is very active in selling, so it was a great training ground for me.” 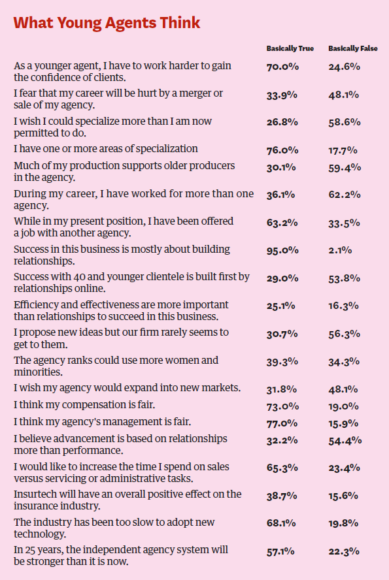 Sanders spent just about every day with him. “I worked on his book, I worked with his clients, I went to all of his meetings for the better part of a year, and in the meantime, I would sort of work off of his prospect list while developing my own prospect list,” Sanders explained. That meant calling on those prospects, trying to set meetings for both of them, and really practicing the trade.

“I would handle most of the busy work behind the scenes, and he would do most of the talking early on and I would follow his lead.” Over the next 12 months, Sanders slowly began taking the reins.

“It worked out so nicely for somebody like me who’s trying to develop their book,” he said. Commissions were split on any business they sold as a team. “If I generated it, if I created the initial meeting and it led to business, we would split that new business commission right down the middle,” he said. “If it came from his prospect list, ultimately, that client would remain in his book. But if it was a brand new one that I had discovered and it was my prospect, he would help me sell it, we’d split the first year commission, and then that prospect or that client would go onto my book.”

Sanders said the training and help he received has been an “awesome” experience. In insurance, the learning curve is huge, so the right training makes all the difference. “If you don’t have an insurance background, it’s like learning Latin. You just have no idea.”

For 38-year-old Renee Licata, insurance is a second successful career in sales and marketing. After several years, in sales for a computer software and technology company, Licata, currently the director — Collegiate Division, at Syracuse, N.Y.-based Haylor, Freyer & Coon Inc., decided she wanted to tackle a new challenge — insurance.

A friend recommended the agency during a time that she was considering a change in careers, she said. “The timing actually couldn’t have been better because they were looking for a new director of the collegiate department,” she said. “I thought it would be a great fit.”

Licata could see there was room for growth and she knew insurance was always in demand. “I definitely saw a need and knew it was a market [that was], in my opinion, not overly saturated.” Plus, her “go-getter” personality is a good fit for an insurance agent. The next step was simple, she said. “I had to learn about the industry,” she said.

Haylor offered her the help she needed. “They fostered support for me as I got up and running with my book of business. Not only by having people show me the ropes so to speak but just through positivity,” she said.

Licata says that support made all the difference. In just three years, her book of business grew so fast that she became the top producer in 2017 and 2018 at Haylor, Freyer & Coon, which ranks as No. 58 on Insurance Journal’s Top 100 list of independent agencies nationwide, generating $114,033,368 million in total revenue in 2018.

Licata’s past tech experience has been helpful as well. “I have been able to put to use some of my past technology knowledge for this type of position that I think may be advantageous not only for me but for Haylor, too,” she added.

She admits it’s not easy moving to a new industry and building a new book of business from the ground up. But it’s her biggest accomplishment to date. “As silly as it sounds, really proving to myself that I could do it” was rewarding, she said.

Licata hopes her success story sets an example, not only for her own 13-year-old daughter, but for other young women entering the industry. “Reach for whatever you want to be in life,” she said. “Be strong, be independent and reach for the stars.”

While young agents may have a tech-edge on some of their older counterparts, they are not blind to how relationships — and sales — are built in the industry. According to the Young Agents survey, 95% believe that success in this business is mostly about building relationships.

Eric Weiser, 31, vice president at his family-owned agency Weiser Insurance based in Houston, understands the value of face-to-face interactions when networking with prospects. He doesn’t use LinkedIn or Facebook to network and has built a nearly $2 million book of business the old-fashion way, by focusing on “natural” relationships.

“The best victories that I’ve had and the best relationships that I’ve had have been referral business,” Weiser says. “It’s meeting people the natural way and just doing the right thing instead of just being a salesperson and trying to slam something down their throat.”

Weiser says middle market buyers are not looking for their next broker or relationship online. “They’re looking through their trusted network whether it’s a CPA, an attorney, their payroll guy … that’s where they’re getting sound, good advice,” he said. “Building relationships with those type of people and delivering, always delivering when they bring you in on an account is where you really grow your book in this industry.”

After seven years in the family business, he admits the first two years are challenging but advises young agents to not give up. “You have to have the ability to hear ‘no’ a hundred times,” he said. “But if you stick through it and just do all the right things for all the right reasons, and keep trying to build true, trusting relationships you will succeed in this business. There’s enough buyers that want do business with good people.”

And don’t think youth is a disadvantage in the sales game, he adds. “I use the fact that I’m young,” he says. He lets prospects know he can be their trusted advisor for the next 30 years. “A lot of people like the young guy, they want to help someone succeed.”

But, he says, never let that replace knowledge. “Understand insurance because when you’re young that’s a really quick way to level the playing field,” he said. “When I open my mouth in a meeting, I’m very educated on the topic so that immediately brings validation.”

Then focus on the relationships. “It’s really helped drive my success.”

The Young Agents Survey 2019 polled 250 young agents nationwide on their opinions about the industry, their agency, and on being an insurance agent.