It was June 15, 1990, when Mount Pinatubo, on the island of Luzon in the Philippines, awoke from its 500-year slumber to produce the second largest volcanic eruption of the 20th century.

Nearly a year before, Luzon was shaken by a magnitude 7.8 earthquake epicentered about 60 miles northeast of the volcano. Thousands of smaller earthquakes also occurred in the months leading up to the eruption as magma moved toward the surface from more than 20 miles below the volcano. Like most volcanoes, Mount Pinatubo is located along the boundary of tectonic plates. It is here where massive pieces of the Earth’s rigid outer shell, or lithosphere, converge or diverge, producing most seismic and volcanic activity.

But volcanoes and seismic hazards exist as well in the interior of tectonic plates. The Hawaiian Islands, for example, sit well within the interior of the vast Pacific Plate. On Hawaii, earthquakes accompany the movement of magma within and under active volcanoes such as Mauna Loa, Kilauea, and Hualalai, and sometimes release the strain that accumulates along the flanks of these volcanoes.

These and other volcanoes also influence Hawaii’s seismicity, as their heavy weight can stress the Pacific lithosphere to the point of triggering an earthquake. The culmination of these risks produces seismic hazard on the south side of Hawaii Island that is comparable to that of coastal California, even though Hawaii is far from any plate boundary.

Earthquake hazard on the Hawaiian Islands is greatest along the flanks of the Big Island’s active volcanoes: Kilauea, Mauna Loa and Hualalai.

Thousands of earthquakes occur every year on and around Hawaii Island, or the Big Island. Most of these temblors are too minor to be felt, but some are strong enough to cause minor to moderate damage. Earthquakes are particularly common on the south side of the island, where the largest events have taken place and where the historical earthquake rate is relatively high (See Figure 1). 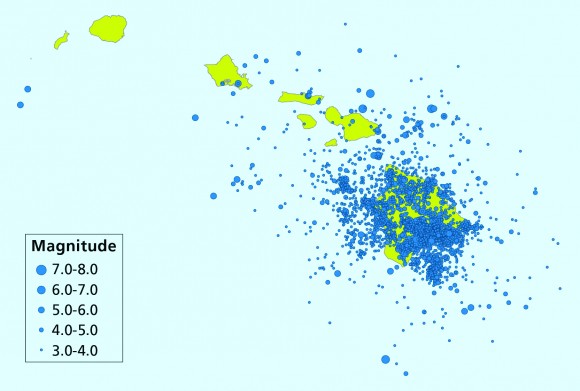 While roughly 20 earthquakes of magnitude 6.0 or greater have occurred on or very close to the Big Island since 1868, only six events have taken place northwest of Hawaii Island, from Maui to Molokai. This decrease in historical seismicity from the southeast to the northwest across the island chain is a result of Hawaii’s geologic history — a unique combination of plate tectonics and hotspot volcanic activity.

The Hawaiian Islands are located at the southeastern end of an extensive volcano chain consisting of hundreds of islands, islets, and seamounts (submarine mountains) spread across some 1,500 miles in the central Pacific Ocean. These islands formed nearly 70 million years ago as a result of a hotspot deep within Earth’s mantle. The hotspot caused a plume of magma to rise up through the Pacific tectonic plate and erupt at Earth’s surface. Over time, countless eruptions caused a seamount to rise from the ocean floor until it finally emerged above sea level to form an island volcano. Appropriately, this type of volcano is known as a hotspot volcano.

As the Pacific tectonic plate moved in a northwesterly direction, it carried the seamount with it while the Hawaiian hotspot remained fixed in place. While this seamount was cut off from the source of the hotspot, a new seamount formed in its place. Over time, these successive seamounts caused an undersea mountain range, known as the Hawaiian-Emperor seamount chain to form. The oldest seamounts have since eroded to below sea level; today’s state of Hawaii comprises the still exposed peaks of the youngest mountains. As a result of being both older and farther from the hotspot, which today is located roughly beneath the southeastern side of the Big Island, the northwest Hawaiian Islands have lower rates of volcanic and seismic activity.

Seismic Hazard Across the Island Chain

Earthquake hazard on the Hawaiian Islands is greatest along the flanks of the Big Island’s active volcanoes: Kilauea, Mauna Loa and Hualalai. The volcanic activity here generates abundant small earthquakes and seismic swarms.

Large earthquakes, rupturing along major rift zones beneath the active volcanoes, are caused by release of strain accumulated along the mobile flanks of the volcanoes through the magmatic processes of island-building.

Seismicity also comes from deep, non-volcanic earthquakes that are triggered by the release of long-term accumulations of lithospheric stresses due to flexure of the crust under the heavy load of the islands.

The 2006 M6.7 Kiholo Bay event and its M6.0 aftershock, both of which ruptured at a depth of 29 km (17.98 miles) on the northwest part of the Big Island, were likely generated by the release of stress due to crustal loading.

The 2006 event was the strongest earthquake to affect Hawaii in the last 20 years; it caused more than $100 million (2006 USD) in economic losses in a relatively sparsely populated part of the island.

In the northwest Hawaiian Islands, there is a gradual decrease in seismicity away from the hotspot due to the slow rebound of the Pacific Plate and the relaxation of the lithosphere over time.

A catastrophe model must capture the diversity of the earthquake hazard across the Hawaiian Islands. The 2013 AIR Earthquake Model for Hawaii does so by way of a 10,000-year catalog of nearly 15,000 simulated earthquakes. Regional seismicity along the island chain is modeled by five types of seismic source zones, including the flanks of active volcanoes on the Big Island, Kilauea rift zones, shallow smoothed seismicity zones, deep smoothed seismicity zones, and a single large zone encompassing the northwest islands (See Figure 2). The model also includes two extreme disaster scenario events that can help assess large loss potential.

While these scenarios are highly unlikely and are associated with considerable uncertainty, they are nevertheless scientifically plausible and would produce large losses if they were to occur. The first event has a magnitude of 6.9 and occurs near the Hawaiian capital city of Honolulu and the census-designated place of Kailua on Oahu. The second event has a magnitude of 8.2 and occurs at the southeastern side of Hawaii and would produce large losses in Hilo — the settlement with the majority of the insured loss on Hawaii Island.