There’s little question that the drought and the recent wildfire season that it unleashed pushed more California homeowners into the surplus lines market.

Now with what appears to be a strong El Niño on the horizon for the Golden State, homeowners in burned areas that may be more prone to flooding and mudslides could also look for coverage in the surplus lines market.

“Certainly there has been an increase in homeowners policies being placed in the surplus market,” McKay said.

If there ever was a time to buy flood insurance, this is that time.

He believes the increase is due to insurers reducing exposures in drought-plagued communities that are being built ever closer to the wildland-urban interface in Northern California, where massive burns occurred in September.

As the admitted market sought to lessen its concentration in those risky areas in the past few years, the surplus market has gone in and priced that heightened risk, McKay said.

“Look when it started – in 2012,” he said. “That was the beginning of the drought and conditions started to deteriorate.”

That deterioration – drier fuels and searing temperatures – came to a head in September with the Valley and Butte wildfires in Northern California. The fires and several destructive wildfires in the region throughout the summer had already curbed insurer appetites for writing in these fire-prone areas.

“We have heard from consumers that they are seeing that it’s difficult to find insurance,” Madison Voss, a spokeswoman for the California Department of Insurance, said in September as the two massive wildfires were still raging.

The tally on losses from the Valley and Butte wildfires is massive and growing. A report in October from Impact Forecasting, Aon Benfield’s catastrophe model development team, forecasts claims from two wildfires will exceed $1 billion.

The Valley Fire, which occurred northwest of San Francisco, is considered the third-most damaging wildfire in California history. It destroyed 1,958 homes and other structures. Total economic losses from the fire were more than $1.5 billion, and preliminary figures for insured losses were estimated at more than $925 million, according to the Aon report.

Expect those figures to continue to rise, said Steve Bowen, lead author of the Aon report.

Bowen expects new loss estimates to be out as early as late November.

“It would not surprise me at all if we see the insured losses for the Valley and Butte fires upwardly revised at least a little bit,” Bowen said.

The average residential policy claim payout for the Valley Fire so far is roughly $160,000, and the average for the Butte fire is $100,000, according to Bowen. Those figures include a range of partial to total losses.

More rains, while they may help alleviate the impacts of a four-year-long drought, also bring increased risk in those areas.

“There’s absolutely going to be an enhanced risk given the amount of precipitation an El Niño can bring,” Bowen said. “There absolutely could be a problem with flash flooding, mudslides and debris flows.” 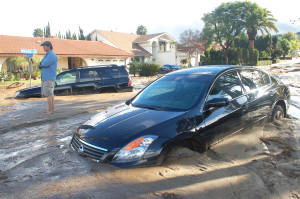 Average prices for many homes in the area are within $250,000 residential limit on the National Flood Insurance Program, but interspersed among those properties are numerous large and difficult-to-insure homes with ample space surrounded by plenty of trees, and amenities like expensive outlying guests houses.

Surplus lines may increasingly be the answer for these homeowners who may now be exposed to greater flooding risks as admitted insurers scale back.

“With high capacity properties that don’t fit an ISO form, the admitted market will often times pass, then that policy will be written in the surplus lines market,” Mckay said.

“There’s been a little bit of pickup, but for pricing purposes what we’re seeing as of yet it hasn’t come to fruition so far,” said Laufer, who is also president of the California Insurance Wholesalers Association.

Like McKay, Laufer believes the admitted markets, which bore the bulk of losses from the Valley and Butte wildfires, are starting to take a hard look at their exposure in those areas.

Cue an El Niño. The chances of strong rains, and likely increased flooding risks, throughout most of California are good bets.

Tom Di Liberto, a meteorologist at the National Oceanic and Atmospheric Administration’s Climate Prediction Center, believes this could be on one of the strongest El Niño events since weather watchers began tracking the phenomenon in the 1950s.

“I would say that we’re currently in a strong event,” Di Liberto added.

Excess rainfall on land that’s arid due to drought, or burned out land, are both dangers for homeowners, he said.

“Concern is there that his could lead to another round of landslides and mudslides,” Di Liberto added.

Roy Wright, a deputy associate administrator at the Federal Emergency Management Agency, encouraged Californians to take the threat of El Niño seriously during a news conference.

“If there ever was a time to buy flood insurance, this is that time,” Wright said.

Following the fires the take-up rate at California’s Fair Access to Insurance Requirements plan, commonly known as the FAIR plan, began to rise, said Nancy Kincaid, a spokeswoman for the California Department of Insurance.

“The FAIR plan has seen some growth,” Kincaid said.

The plan is the insurer of last resort for residents unable to find coverage through private insurers. The FAIR plan provides basic coverage for fire up to $1.5 million for a structure and its contents.

Many of the FAIR plan policies are being written in state-responsibility areas – those places that may be removed from local fire services and served primarily by Cal Fire, Kincaid said.