One year ago, Hurricane Sandy slammed into the New York and New Jersey coasts. As a result, 43 people died, lower Manhattan was dark for days, and seven hospitals had to be evacuated. 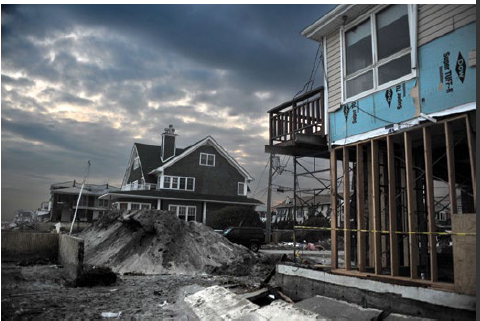 In New York and New Jersey, 650,000 houses were damaged, 8.5 million people lost power and reconstruction is expected to cost more than $60 billion.

This destruction reawakened our leaders to the vulnerability of our coastal communities and brought home the dangers of climate change. But have we learned the right lessons?

New York City and the federal government responded. They recognize how vulnerable our coastal communities are to climate change and extreme events such as Sandy.

But we are concerned that uncertainty in climate change predictions is unduly hampering and constraining our actions.

As former leaders of the Department of Defense’s efforts to adapt to the threats of climate change, we believe there are valuable lessons to be learned from military planning.

Our experience has taught us that uncertainty about potential high-impact events must be embraced and consciously factored into planning decisions.

A future with more frequent intense storms, on top of higher sea levels, will increase the vulnerability of coastal communities to storm surge.

Uncertainty about potential high-impact events must be embraced and consciously factored into planning decisions.

The post-Sandy planning for climate change has been focused on sea levels, which are certain to rise at an accelerating rate over the next century. There is broad consensus on this in the scientific community.

It is easy to visualize and relatively straightforward to estimate the changes in vulnerability due to sea level rise.

New York City and the federal government have begun to provide planning tools and guidance to help manage this risk.

But it was not a rise in the sea level that made Sandy so damaging. It was Sandy’s unusual direction, intensity and sheer size that caused such damage. Sandy broke 16 storm surge records along the East Coast. The surge at New York City was five feet higher than a 100-year event and estimated to be a 500- to 1,000-year event.

Will events like this become more frequent in a warmer planet? We don’t know for certain, but we do know current New York City and federal efforts have ignored this aspect because of the uncertainty.

Modeling hurricanes under future climate scenarios is complex and difficult. The accuracy of our predictions for the effect of climate change on the frequency and intensity of hurricanes is uncertain. Yet even in the face of these uncertainties, we know that a shift in frequency of the more intense hurricanes is plausible. Worst case: What we think of today as a 1-in-100 year event could become routine, and even a 1-in-500 year event could become a “once in a mortgage” (25- to 30-year) storm.

It is not just New York that faces these vulnerabilities. Critical facilities like Norfolk Naval Base (in Virginia) are just as sensitive to changes in the frequencies of big storms as to sea level rise. If a 100-year event becomes twice as likely, Norfolk faces flooding of two-thirds of the base far too frequently to ignore.

This is twice the area that even a three-foot rise in the sea level would impact. Ignoring the potential for an additional third of the base to be out of commission is not smart planning.

Do we know the future? No. But to ignore the possibility is the same as assuming we have high confidence there will be no change — and that is simply not true.

The military has a long history dealing with large uncertainties in its strategic planning. What is sometimes termed “deep uncertainties,” where one cannot assign probabilities to future events, are systematically considered and managed.

The traditional approach of risk management, where one can quantify the likelihood of an event, is often addressed by sensitivity analysis and optimization. But what do we do if we cannot estimate the likelihood?

For years and likely decades, we will be faced with deep uncertainties as to the exact impacts in any specific town or city.

For extreme events like Sandy, which disproportionally constitute the bulk of future risk, we should exploit the lessons of military strategic planning.

While these actions may not have an effect for decades, we need to start now. We are fooling ourselves and citizens of our coastal communities by ignoring threats that are plausible, even if uncertain.

Marqusee is chief scientist at Noblis Inc., a nonprofit science, technology, and strategy organization based in Falls Church, Va. He is former executive director of the U.S. Department of Defense’s Strategic Environmental Research and Development Program. Titley is a senior scientist in the Meteorology Department at Penn State and founding director of Penn State’s Center for Solutions to Weather and Climate Risk. Titley served as a naval officer for 32 years, rising to the rank of rear admiral. In 2009, he initiated and led the U.S. Navy Task Force on Climate Change.