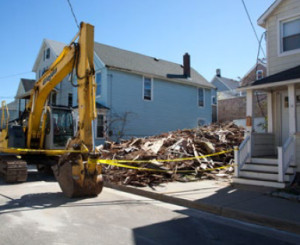 U.S. Rep. Tom MacArthur (R., N.J.) on March 2 called for an investigation into the Federal Emergency Management Agency (FEMA) after stories surfaced that FEMA was aware of allegedly fraudulent engineering reports that may have been used to deny flood claims by Superstorm Sandy victims. The New Jersey congressman also asked for the resignation of FEMA Administrator W. Craig Fugate.

“I am outraged and saddened to hear reports that FEMA may have turned a blind eye to corrupt and fraudulent practices used to deny full assistance,” he said.

According to CBS’s “60 Minutes” that aired March 1, Brad Kieserman, who was appointed as head of FEMA’s flood insurance program earlier this year, said that based on what he’s seen, “there were signals in late 2013, early 2014, that there were problems that the Sandy survivors were experiencing with engineering, with the claims process, with appeals.” Kieserman said he has referred to the inspector general the evidence he’s seen of alleged fraudulent reports. Some insurers participating in the flood insurance program have faced allegations in recent months that they denied claims based on falsified reports.

As Employees Have Stressed Out During Pandemic, Many Employers Have Stepped Up