According to National Oceanic and Atmospheric Administration’s (NOAA) Spring Outlook released today, rivers in western New York and eastern New England have the greatest risk of spring flooding in part because of heavy snowpack coupled with possible spring rain.

Record-breaking snows in western New York and eastern New England, along with significant river ice, has elevated the risk of moderate flooding, according to NOAA.

Record snowfall and unusually cold temperatures in February through early March retained a significant snowpack across eastern New England and western New York raising flood concerns. And significant river ice across northern New York and northern New England increase the risk of flooding related to ice jams and ice jam breakups, NOAA said. Rivers in these areas are expected to exceed moderate flood levels this spring if there is quick warm up with heavy rainfall.

While there was record snowfall in the Northeast, particularly in parts of New England, and there is some risk of moderate flooding for the area, above-normal flooding is still unlikely, according to NOAA.

“Rivers in these areas are expected to exceed moderate flood levels this spring if there is quick warming and significant rainfall,” said Mary Mullusky, chief of NOAA’s hydrologic services branch.

NOAA’s Spring Outlook identifies areas at risk of spring flooding and expectations for temperature, precipitation and drought from April through June. The Spring Outlook provides emergency managers, water managers, state and local officials, and the public with valuable information so they will be prepared to take action to protect life and property. 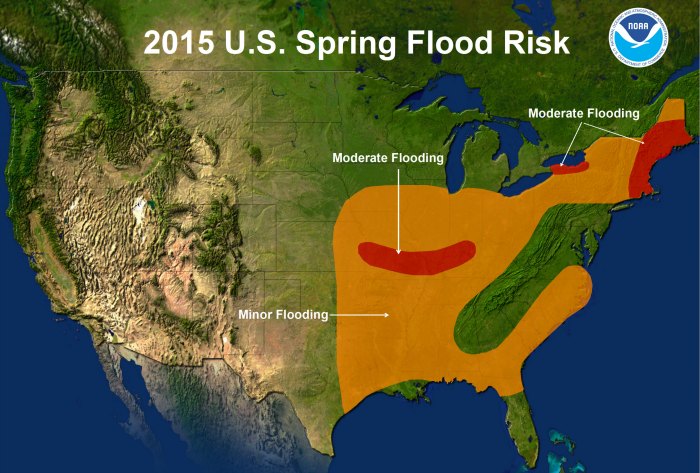