Car-sharing startup Turo Inc. is returning to New York, seven years after leaving the state that was once its biggest market over a dispute with regulators about insurance rules.

Turo, which allows vehicle owners to put their personal cars up for daily rentals through its website and smartphone app, aims to compete with traditional offerings from Avis Budget Group Inc., Hertz Global Holdings Inc. and Enterprise Holdings Inc.

Starting in January, Turo will allow listings in New York, but only from those users in its commercial host program, which is designed for independent rental companies who provide their own insurance. These companies must also be registered with the state.

Turo will also be allowed to advertise its platform in New York for the first time since 2013, when it suspended operations there because the New York Department of Financial Services said it was not complying with state insurance laws. In 2014 the state fined the company, which was then known as RelayRides, $200,000 for false advertising, unlicensed insurance activity and other violations.

“Frankly this couldn’t come at a better time,” Turo Chief Executive Officer Andre Haddad said in an interview with Bloomberg Television. “Subway ridership is down, ride-sharing is down. Many consumers want the safety of a private space of a car and frankly New Yorkers are really saddled with the worst traditional car rental experience in the country”

New York once accounted for 20% of its revenue, and the 11-year-old startup has sought to return to the state ever since it left. But the deal it struck is only a partial victory, because it won’t allow the core of Turo’s business–enabling private car owners to rent out their vehicles.

The peer-to-peer rental industry has been lobbying state legislatures for rules that make it easier to operate, often pitting itself against traditional car rental companies. New York, whose insurance rules don’t allow the commercial use of privately-owned vehicles, remains one of the least hospitable states.

Getaround, Turo’s main rival in peer-to-peer car sharing, already operates in New York, saying it requires vehicle owners to carry commercial insurance. A spokesperson for the state’s DFS said Getaround doesn’t have authority to operate car-sharing between private individuals, and confirmed the terms of the agreement with Turo.

Haddad said Turo will continue to work with regulators and state officials in the hopes that they will be able to expand to peer-to-peer car sharing soon. Turo and Getaround have been pushing the legislature to adopt new rules that would allow it to provide insurance directly to consumers. 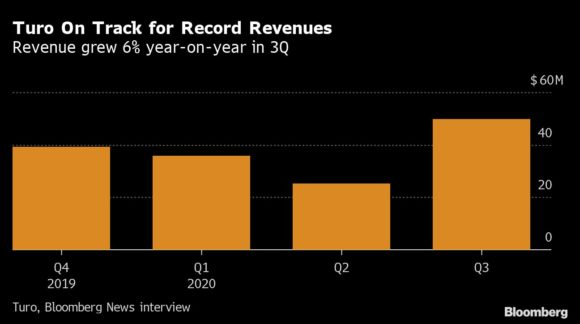 The partial return to New York is another significant development in a chaotic year for Turo. Coronavirus hit it hard this spring. It made steep job cuts and took $5 million through the U.S. Paycheck Protection Program after its second-quarter revenue dropped 25% compared with the year before. Turo has raised about $500 million to date from private investors including IAC/InterActiveCorp., Daimler AG and Manhattan Venture Partners.

But car-sharing has since bounced back. Turo has recorded $110 million of revenue so far this year, and is projecting that 2020 will be its best year ever in terms of total sales.

–With assistance from Taylor Riggs, Romaine Bostick and Caroline Hyde.