Insurance companies are running out of ideas.

They’ve bolstered their balance sheets since the financial crisis but have few racy growth prospects in a world of low interest rates, pricing pressure and regulatory hassles. Big mergers may be the most tempting route to scale and cost-cutting opportunities — think Standard Life-Aberdeen or NN Group-Delta Lloyd — but they’re often difficult to execute. They also don’t answer fundamental threats to the business model, including the arrival of new tech-savvy competitors. 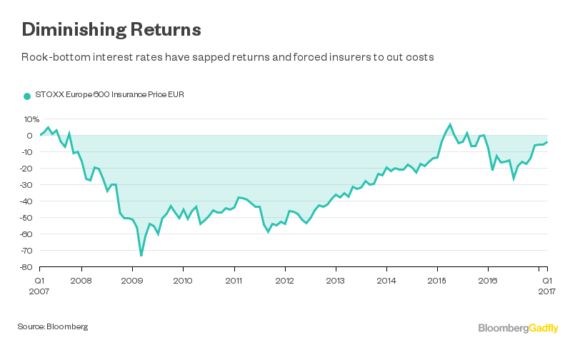 For insurance bosses, it’s technology that will bring the real edge in the long term. Sometimes it will be worth giving money to a fintech hipster over a deal-hungry banker.

Insurance tech investments are still tiny overall — companies on average spend just 0.2 percent of annual premiums on digital initiatives, according to a 2015 Accenture survey — but it will rise, says Bloomberg Intelligence’s Charles Graham. Digital spending was one reason British insurer Aviva Plc reported an increase in annual expenses to 3.4 billion pounds ($4.1 billion), from 3 billion pounds, in 2016.

Sure, the Aviva shareholders were clearly more excited this week about dividends and paying down debt. Yet the industry as a whole is waking up to the need for new ideas to cut costs and defend market share. Revenues have sagged in the last decade as low interest rates weighed on investments and payout guarantees to policyholders got tougher. 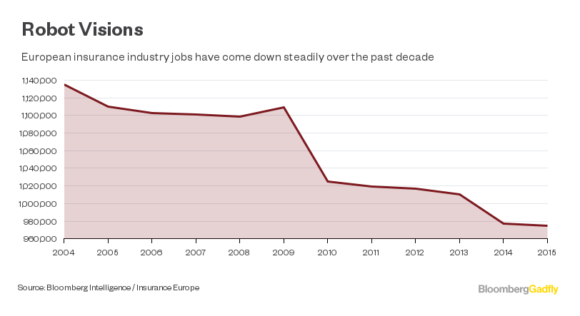 Tech investments can run from the mundane, such as crunching databases together and online selling without lots of form-filling, to the more “Black Mirror”-style world of wearable devices that track aches and pains and help curb claims. Tech disruption has some perils for insurers: fewer claims would drag down premiums and lead to more cost cuts. But the benefits should outweigh the losses.

Allianz SE expects digitization will help it generate 1 billion euro of yearly productivity gains in its current three-year plan. Even though its earnings per share growth will be helped by a $3.2 billion share buyback, it knows it has to dig out more savings over the long term. The industry as a whole would do better by automating back-office functions, says McKinsey. 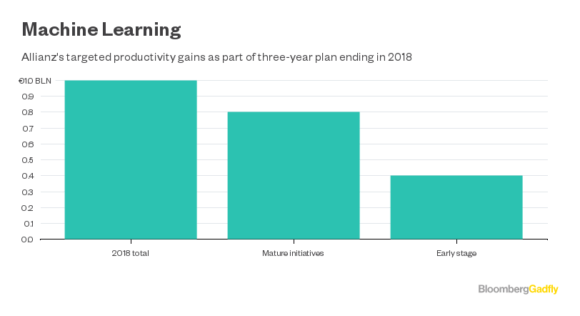 The hard part is getting shareholders to wait patiently for any extra spending to bear cost-cutting fruit. Many would rather more immediate and radical measures, such as deals. Italy’s Assicurazioni Generali SpA said in 2015 it would reinvest 1.25 billion euros in technology and data analytics through 2018. This year, after an abortive merger tilt by Intesa Sanpaolo SpA, it’s under pressure to sell assets or work harder to convince shareholders it can deliver returns alone.

But while a big merger can seem a straightforward way to strip out cost and expand, it brings the risk of a double layer of legacy operations without any new way of doing business. And, as Allianz shows, tech investment can pay off. Making underwriting and claims handling more automated will let insurers cut staff numbers, one of their biggest costs.

Industry share prices are enjoying short-term bumps from buybacks, mergers and the prospect of U.S. rate hikes. But for insurers, the bigger rewards will come from machines, not M&A bankers.

This column does not necessarily reflect the opinion of Bloomberg LP and its owners.