Boardroom pay is a contentious issue in the U.K., which is hardly surprising when top CEOs earn 145 times more on average than their workers. Shareholders have been slow to call time on the gravy train, probably because the stock-market boom has lined their pockets too. Yet things are changing, as can be seen in the shortening career span of the average boss.

The average CEO tenure at a FTSE 350 company has fallen from 6.2 years in 2015 to 5.5 years today, according to Bloomberg data, or a drop from 4.5 years to 4 in median terms. The past year has seen a string of high-profile departures such as Xavier Rolet from London Stock Exchange Group Plc and Martin Sorrell from WPP plc, but also of those who failed to even last four years in the job, like Stephen Kelly at Sage Group Plc and John Phizackerley at TP ICAP, both ousted in the summer. The latter departures were hastened by profit warnings, but also grumblings about pay.

The trend over the past decade suggests life is getting less cushy for British bosses, whose pay has soared with the stock market but often without a real improvement in the business. In 2010, the median tenure of departing CEOs in the U.K. was 8.3 years, versus about six years in Western Europe and North America, according to PwC. The next six years saw the FTSE 350 index rise 46 percent and chief executive compensation grow 20 percent — even as Ebit shrank 31 percent. That might help explain why the recent tenures have become so much shorter.

Shareholders seem less willing to put up with weak performance, and boards of directors appear quicker to act on their behalf. Gauging the mood of investors is happening more frequently, especially at a time when money managers such as BlackRock are looking closely at everything from wage growth to climate change when deciding where to invest their money.

Non-executives know their own jobs are ultimately on the line if they back the wrong horse for too long. Activist investors are on the prowl and keen to sweep out board members they deem to be too entrenched.

Ditching a boss can backfire, of course. LSE Chairman Donald Brydon has agreed to step down from the exchange’s board after shareholder anger at his handling of Rolet’s departure. And a vacuum at the top doesn’t exactly inspire confidence on the stock market. Insurer Aviva Plc’s shares have tumbled 11 percent since the exit of CEO Mark Wilson earlier this month. His departure made sense yet was also pretty brutal, with no replacement to hand.

Still, shorter CEO reigns suggest shareholders may be finally making progress in holding bosses to account. Excessive pay may be trickier to solve given the competing pockets of private equity. But any evidence of a clearing out of flawed leaders is welcome. 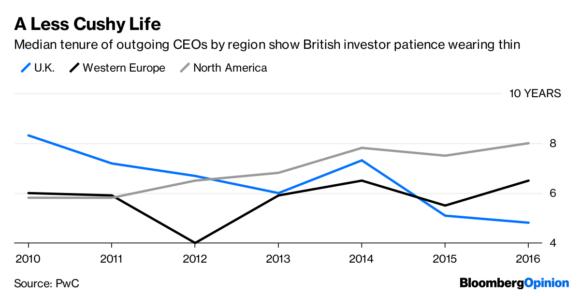