This article is part of Carrier Management’s Cultural Q&A series featured in the Nov/Dec 2018 print edition.

Q: Do you spend more time on culture or strategy?

Pat Regan, Group CEO, QBE Insurance: Definitely culture. We spent a bit of time when I came into the role figuring out our strategy, where in the world we wanted to play and how, but that was sort of a done-once exercise. We do need to revisit that, but we spend a lot more time bringing our culture to life. Of course, we continue to spend time on our strategy, but for our cultural work, we do something every day.

Q: Was QBE DNA a response to your company’s restructuring program? 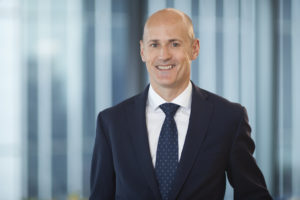 After Pat Regan became Group CEO of QBE Insurance in January of this year, he continued to spend a lot of his time on the company’s ongoing restructuring to return it to consistent profitability. But he admitted in a recent interview withCarrier Management that much of his time is spent on developing the company’s identity via its “QBE DNA” program, which was launched this year and replaces a previous program called “One QBE.”

Regan and his team came up with a list of seven cultural attributes, using hashtags: 1. We are customer-centered (#OutsideIn); 2. We are technical experts (#KnowYourStuff); 3. We are diverse (#MixItUp); 4. We are fast-paced (#RampItUp); 5. We are courageous (#DoTheRightThing); 6. We are accountable (#OwnItNow); and 7. We are a team (#Together)

When visiting QBE in London recently, Regan sat down with CMto discuss the work that QBE has done to create global corporate culture via its new QBE DNA program.

In 2016, when Regan was group CFO, he told CM that people are the key to a CFO’s success. “You’re only as successful as the team of people you build around you, how well you mobilize them and the vision you set of what you’re trying to achieve.” (Read the full profile article at carriermag.com/xne3k)

Regan: My predecessors had begun to do a lot of work on creating a greater sense of there being “One QBE”—and I’m a big believer in that as well. It’s not like I’m throwing that out of the window at all. QBE has been quite “federated,” for want of a better word, and our culture has been different in different places. My predecessors tried to create a greater sense of a team running the whole company in a more joined-up way. We’re just trying to extend and build on the concept now with the new program: “QBE DNA.”

Regan: You need a little bit of all of them is the conclusion we reached. [During the development of QBE’s seven cultural attributes], one of my contributions was creating #KnowYourStuff. For a company like ours, technical ability comes naturally. However, other things like innovation may be a little less natural for insurers. I really thought being action-oriented and fast-paced was important because the insurance companies, at their worst, can be bureaucratic and slow moving. As a result, we came up with #RampItUp to show we want to be fast-paced. Similarly, you must be customer-oriented as well. At the end of the day…I think you can weave all of those things into the corporate culture. But the non-negotiables are the cultural attributes about high integrity (#DoTheRightThing and #OwnItNow) and having an inclusive and diverse place to work (#MixItUp).

Q: How does the structure and physical environment of your organization support the current culture?

Regan: We operate in places that are quite geographically diverse, with huge distances involved and different time zones. In a global company, one of the ways you create a unified culture is to have regular team meetings. If everybody is around you, that’s easy to do, but if you’re calling a meeting of your global team, it’s 11:00 at night for somebody. Even if they agreed to participate, they probably just want to get off the phone.

Those kinds of barriers are the reason we haven’t had a common culture at QBE. While we’ve had local cultures in the U.K., in Australia or in North America, it’s been harder to create a single, global QBE culture. To help build it, you just have to be smarter and more thoughtful. Modern tools and technology help a bit—for example, using video conferencing (VC). I’m a huge believer, especially in running this kind of company, to allow people to work as flexibly as makes sense for them. If you’re going to be on the VC from home at 10:00 at night, then don’t come in the first thing tomorrow morning. Why would you?

Actually, people really enjoy working together; when they’re given the opportunity, they love to do it. And I think modern tools and technology helps that, as does backing that up with flexible working. It’s kind of funny, today when you walk around this office, you’ll see many fewer people wearing a tie. Years ago, you would get shown off the premises if you weren’t wearing a tie in London.

In Sydney, the summer is 40 degrees (104 degrees Fahrenheit), and until quite recently, men came to work in a suit and a tie, which was just so ridiculous. These days, people come in and wear what they want to wear. Sometimes they have to wear a suit and tie because they’ve got an important meeting. But if they don’t, they can be more casual. All this helps to build a better working environment.

A few years ago, the group moved to a new building for its head office in Sydney and now has teams in two separate buildings, but I’ve never liked that. We’re trying to find ways of co-locating those teams in the same building. It’s much easier to build common culture if you’re next to each other, and it’s also important for the group head-office teams to be physically closer to people who are handling customers.

Q: Describe your role in shaping and perpetuating the corporate culture?

Regan: When we came up with the QBE DNA program, obviously I had a hand in shaping that, but it was really important that it was a broad team effort. But it’s also important I’m comfortable with the shape of it because my job is to be role model No. 1. If I’m not role modeling [the cultural attributes], we’ve got zero chance of success.

It’s also important that we create an environment where people will tell me that I’m not being a role model. Look, it’s easy for me to tell people when they’re not living up to the attributes, isn’t it? But I also need to live them…, be a role model. And my team has to call me out in the moments when I’m not. If we can do that, and my team can do that, and their teams can do that, then we’ll be able to create the culture we want, I think.

I think just being in the role of group CEO makes you unapproachable to some degree, and it’s silly not to acknowledge that. There’s lots of big and little ways to try to break that down. I sit in an open plan office with my team, so they don’t have to cross a physical barrier to come and see me. That makes it a little bit easier to be accessible, I think, and a number of our leaders do the same. But then it’s up to me to walk around and talk to people.

One reason I do a Pat Chat is exactly that. [Regan does a regular series of online “Pat Chats” via the company’s online collaboration tool, Yammer]. I’ve met a number of our people who now feel they know me a bit. They’ll tell me: “Oh, you were in so-and-so last week.” The Pat Chats are all about what I’ve been up to, what the company is trying to do, and at the end of it I’ll add “#OutsideIn” or whatever is the right cultural attribute that matches my message. And guess what? It’s a million times more powerful doing it that way. People quickly catch on.

I role model it, my team role models it, and it sort of catches on…We have done a lot of work on the guts—the business—of the organization. But it was really important at the same time to bring to life the culture, so that people felt we were a kind of heart as well as head.

Q: Does the company have a chief culture officer?

Regan: Yes, this year we hired Liam Buckley to the newly created position of group head of Culture & Talent. He’s based in Sydney, but it’s a global role. He reports jointly to me and our HR director. One of his key jobs is to bring to life the culture across the organization.