Kyobo Life Insurance Co. will raise its holdings in U.S. and European properties and renewable energy projects, and may also buy emerging-market debt, said Cho Hwi Seong, head of the asset portfolio management team. The plan is to boost overseas investments to 30% of total assets, the maximum allowed under the law, he said.

“We’ve increased our foreign investment as local bond yields kept sliding and as hedging regulations eased in South Korea,” Cho said in an interview in Seoul. “We started increasing our allocation in alternative assets two years ago, and have supplemented our human resources for alternative investments.”

Kyobo Life’s shift is part of a global trend where shrinking yields in developed markets are forcing investors from Japan’s top pension fund to Dutch money managers to venture abroad as well as consider alternative assets. As the U.S.-China trade war drags on, investors are hunkering down for a prolonged period of accommodative policy and low yields. 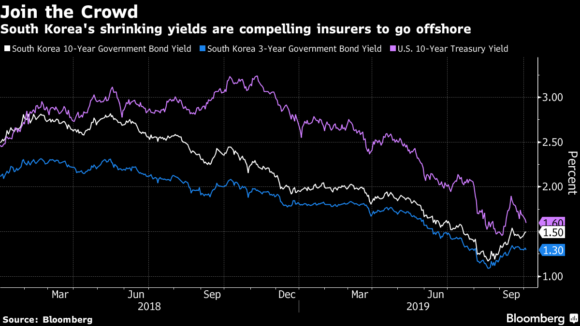 South Korea’s benchmark bond yields touched a record low in August, a month after the central bank eased for the first time since 2016. Inflation fell below zero for the first time in September, while exports dropped for a 10th straight month.

Speculation is growing that a second rate cut will be needed in October to shore up the economy. The Bank of Korea on Tuesday said it will manage its monetary policy to support a recovery as inflation weakens more than expected.

Kyobo Life aims to double its holdings in foreign alternative investments including real estate and renewable energy to 9% while reducing its exposure to short-end South Korean government debt, Cho said. The insurer, which manages about 85 trillion won of assets, has seen its foreign exposure increase to 25% of total from 6.5% in 2010, he said.

Emerging-market bonds are also on Kyobo Life’s radar, although there are regulations on investing in these markets, said Lee Matt Dongmo, the insurer’s head of overseas investment. The insurer began diversifying into U.S. corporate and municipal debt as well as European sovereign securities since the early 2000s, according to Cho.

“Investors are constantly heading to emerging markets for better yields,” Lee said. “While there are issues like Argentina’s default crisis, investors can only be lured to emerging assets.”