The U.K. endured more high-temperature records during the 2010s than any decade over the last century, according to the nation’s weather service, attributing the trend to climate change.

Four of the eight high-temperate extremes from the last decade occurred in 2019, the Met Office said in a statement Friday, citing provisional data. There was only one low-temperature record during the 2010s, it said. 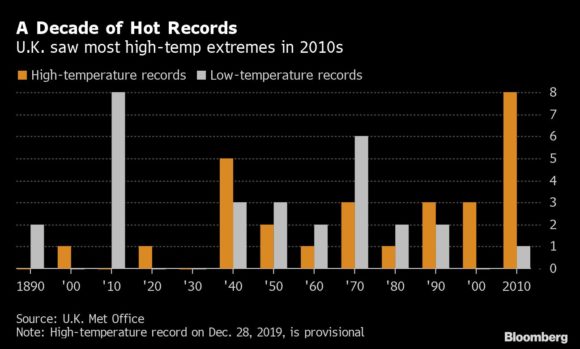 The data add further evidence of a global shift toward hotter and more extreme weather as nations fail to coordinate efforts to stem emissions blamed for climate change. The Met Office’s analysis follows data from Australia on Thursday that 2019 was its hottest and driest year on record as it battles unprecedented wildfires.

“It is notable how many of these extreme records have been set in the most recent decade and how many more of them are reflecting high- rather than low-temperature extremes,” Mark McCarthy, head of the National Climate Information Centre, said in the statement, calling it “a consequence of our warming climate.”

The Met Office in November released a study that concluded 2018’s record-breaking summer heat is set to happen more often and intensely due to climate change.

However, the office cautioned in its Friday statement that even though average temperatures are increasing, cold extremes still occur, citing the March 2018 “Beast of the East” cold blast. The 2010s were the second warmest and second wettest decade over the 100 years of U.K. weather data, both slightly behind the 2000s, the Met Office said.

“The U.K. climate is warming, but this does not mean every decade will be significantly warmer than the one preceding it,” it said.

Photograph: People in a fountain at Granary Square, Kings Cross, London, during a heatwave on Aug.1, 2019. In July 2019, London and other cities in Europe had the highest ever measured temperature and the hottest day, a historical record high. Photo taken by Nicolas Economou/NurPhoto via Getty Images.