It took two years for Nigel Allison to build his mud-brick house on a sleepy southeastern tip of Australia, and just hours for it to be gutted by fire.

The cherished three-bedroom home built in 1986 was one of several dwellings razed in Mallacoota on New Year’s Eve. Wildfires engulfed the coastal town, forcing a naval ship to rescue hundreds of stranded residents and holidaymakers. Across the country, more than 3,000 homes have been damaged or destroyed in the months-long calamity.

Now, residents from Sydney’s forested urban fringe and country towns like Mallacoota are confronting the reality of what it takes to live safely in the world’s driest inhabited continent in an era of climate change.

“As a society, we need to start accepting there are some costs involved if we want to ensure that our houses have a better chance of surviving a bushfire,” said Chris Wyborn, general manager of education and bushfire services with the Melbourne-based Fire Protection Association Australia.

More than 5 million people in Australia live in areas at high-to-extreme risk of wildfires or severe weather events like cyclones, according to SGS Economics and Planning Pty. The number of people in fire-prone areas increased by 111,000 in Victoria state alone in the decade through 2018, the Melbourne-based research group said in a report last month.

Climate change will inevitably increase the number at risk. Last year was the hottest and driest on record, according to Australia’s weather agency, creating tinderbox conditions that enabled fires to blacken an area about the size of England.

“Many of these communities are incredibly risky,” according to Alan March, a professor of urban planning at the University of Melbourne. “We need to start asking, ‘Well, we feel a deep compassion for the people who have lost their homes, but should they rebuild?’ This is not a yes or no answer.”

Allison, a 62-year-old retired schoolteacher, and his partner Liz Girvan estimate that rebuilding their dream home overlooking the ocean will probably cost A$100,000 ($69,000) … for the windows alone.

“The window cost is going to be astronomical,” Allison said over the phone from the town, where he and Girvan have been offered temporary accommodation from a neighbor. That’s not deterring them, though. He said an “emotional attachment” to the 1,000-strong community makes them determined to rebuild.

The cost is high because planning and building rules have tightened in recent years, requiring more fire-resistant materials. Only about 5% of houses in wildfire-prone areas are new, according to Fire Protection Association’s Wyborn.

That means many of those looking to rebuild burned homes may find they are under-insured for the cost of meeting the new standards, said Ian Weir, an architect who specializes in the area. 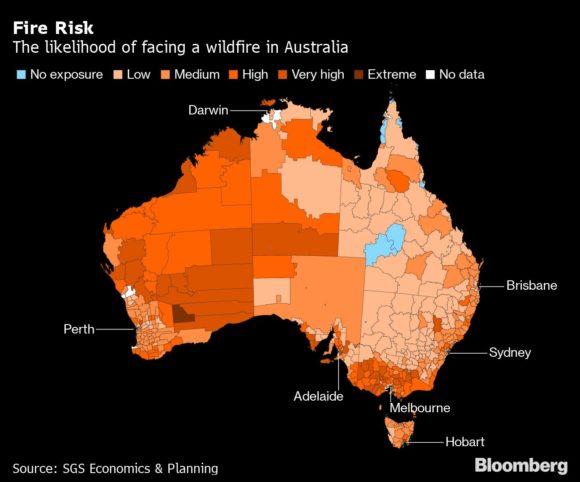 Australia grades bushfire risk levels from low to “flame zone,” with the cost of building in the most dangerous areas increasing by “an order of magnitude,” said Weir.

Homes need to be fortified to commercial-level standards of resilience to withstand the worst threats. Shutters designed to block embers, for example, may cost A$1,000 a square meter ($64 a square foot), Weir said.

They are an important defense since windows can shatter under extreme heat, providing entry points for flying embers that are the principal cause of as much as 85% of homes destroyed in wildfires, according to the Fire Protection Association.

In less hazardous areas, building a basic home that meets fire standards doesn’t necessarily mean large additional costs, Weir said. However, in risky areas construction can become “prohibitively expensive” when lifestyle-features like verandas and decks are added because of the need to use non-combustible materials for structural elements, such as steel, and cladding that’s three times the price of the conventional equivalent, Weir said.

For those under- or uninsured, the cost of rebuilding will be a burden for poorer rural communities, according to Andrew Beer, a regional housing and infrastructure professor at the University of South Australia. The impact on household finances will be “devastating,” he said.

Some of these people will be forced to relocate to cities, while others will remain unprotected. Victorian Premier Daniel Andrews pledged to waive as much as A$55,000 in taxes for fire-affected residents who elect to buy a home in a new area.

Prime Minister Scott Morrison acknowledged last week that the nation must become more resilient to climate change, and proposed a review of the government’s response to the wildfire crisis. Morrison, a staunch supporter of the coal industry, didn’t make any firm commitment to reducing the country’s emissions.

The Australian and state governments pledged more than A$3 billion this month to fire relief and recovery efforts.
Expenditure on mitigation measures such as land-use planning, hazard-reduction fires, protective infrastructure and building innovation is equivalent to only 3% of that spent in response to the disasters, according to Terry Rawnsley, principal and partner with SGS Economics and Planning.

“Successive governments have over-invested in post-disaster reconstruction and under-invested in mitigation, which would limit the impact of natural disasters,” Rawnsley said. “As a general rule, one dollar spent on mitigation can save at least two dollars in recovery costs.”

A military landing craft with CFA members and evacuees from Mallacoota aboard arrives in Hastings, Vitoria, on Jan. 8.

For Mallacoota resident Allison, that means rebuilding his home on a more costly but less risky spot at the front of his block, further from a potential wildfire, “making pretty sure that it’s not going to burn down again.”

“We love Mallacoota,” Allison said. “It is a special place that has a special beauty.”

–With assistance from Matthew Burgess.

Photograph: Sue Wall looks at the remains of her home that was destroyed by a recent bushfire in the town of Lake Conjola in New South Wales, Australia on Wed., Jan. 15, 2020. Photo credit: David Gray/Bloomberg.