One in five workers at Brazil’s meat plants have been infected with coronavirus, according to union estimates. That would make the country home to one of the world’s worst workplace outbreaks.

The estimate comes from Nelson Morelli, the president of national workers union Contac-CUT who spoke Tuesday on a webinar. The figure would mean about 100,000 infected workers in the country’s meatpacking industry, which employees half a million people. To be clear, it’s not an official count and is based on surveys with the group’s local members. But an outbreak even close to that figure would be one of the biggest globally for a single industry, outside of health care.

By comparison, the Brazilian cases would far outstrip the number of U.S. meat workers that fell ill with Covid-19. One of the highest estimates of American infections pegs the figure at close to 41,000, according to data from the Food and Environment Reporting Network, which has been tracking cases since April based on local media reports and figures from health authorities.

Brazil has become the biggest global hotspot for the virus after the U.S. The South American country has roughly 3.4 million cases. But the national infection rate is about 1.6%, dwarfed by the union estimates for a 20% rate among meat workers.

Employees in the meat industry have been deemed essential globally as companies try to keep up with protein demand. But the workers face conditions ripe for the spread of disease, and outbreaks have emerged from South America to Europe and Australia. Brazil is the world’s biggest exporter of poultry and beef and a key supplier of pork. 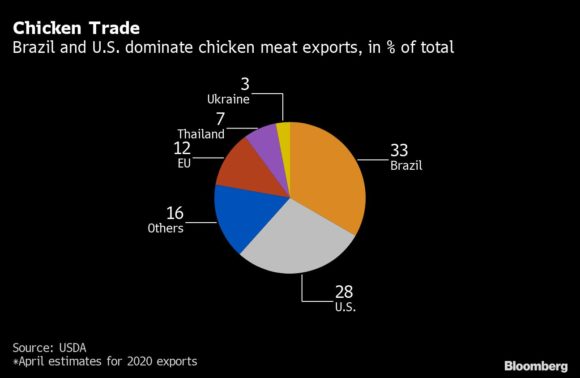 While some companies have increased efforts to improve worker safety and testing, distancing continues to be an issue at every plant, according to the labor unions, who are taking up a national campaign to raise awareness about the conditions.

“We are doing an aggressive campaign because the government is ignoring this situation and some companies are not open to negotiate,” Artur Bueno de Camargo, president of CNTA, a national workers union, said during the webinar.

Unions are seeking more distancing for workers, testing for 100% of the industry’s employees and increased distribution of protective gear.

The union estimate for infected workers is the only current figure for national cases at the plants, because the Brazilian government isn’t tracking the virus by industry. Labor prosecutors, who have put in judicial requests for plants with high cases counts to shutter, also don’t have a national estimate.

The Health Ministry doesn’t collect information on sick people by occupation, hampering an analysis of how infections are spreading in the industry, according to Priscila Schvarcz, a labor prosecutor who has been monitoring Covid cases at meat plants for months.