Londoners are slowly returning to work in offices, factories and stores after children went back to school at the start of the month.

Data compiled by Google show workplace attendance has increased slightly in three of the UK capital’s main employment areas since the beginning of September: the City of London banking and insurance hub, Westminster — which includes the Mayfair and Soho neighborhoods — and Tower Hamlets, a blue-collar borough that also includes the Canary Wharf financial district. 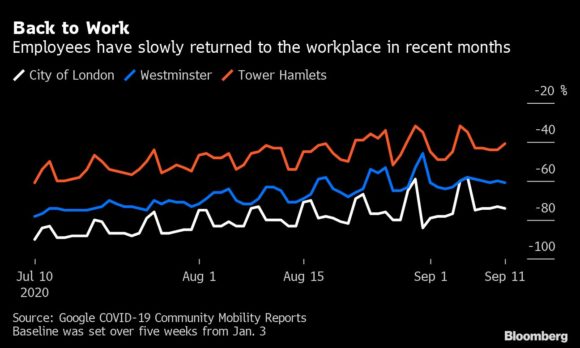 The government hoped that reopening schools would kickstart the economy as it would free up employees to return to their offices, boosting cafes and shops that rely on surrounding workers to survive.

So far, the impact has been muted in central London. The numbers visiting restaurants, shopping malls and other retail and recreational activities in Westminster, which includes the Oxford Street shopping area, was 61% below the baseline last Friday compared with 65% below the baseline two weeks earlier, the Google data show.

Photograph: Commuters cross London Bridge in view of The Shard in London, UK, on Monday, Sept. 7, 2020. UK workers are proving reluctant to go back to their offices. Photographer: Jason Alden/Bloomberg