While the world wrestles with a deadly pandemic and how to confront climate change, there’s another, long-term global challenge that no one really knows how to deal with: population aging. As the human race transitions from a burgeoning, exploding species to a static or shrinking one, economies around the world will come under significant strain.

Japan is the canary in the coal mine here. Although its birth rate is not as low as that of many other rich countries, it’s been low for a longer time. That’s why Japan is now the world’s oldest major economy: 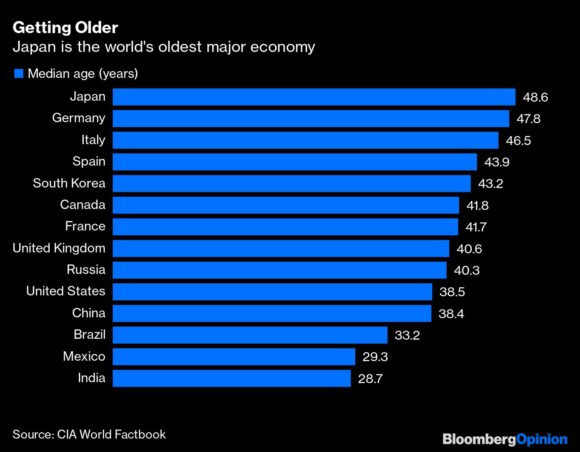 On one hand, Japan demonstrates why a shrinking population doesn’t automatically impoverish a country. Its population is slowly declining and is back down to the level of two decades ago, yet the country’s income per capita has continued to rise as productivity grows and more women enter the workforce. [Editor’s note: See related article about a Swiss Re report on top emerging risks, which include rising intergenerational imbalances.]

But pronounced aging like Japan’s does come at an economic cost. Every year, a dwindling pool of working-age Japanese people is forced to support an expanding pool of gray-haired consumers. This is why Japan’s living standards are falling behind rich countries with growing populations: 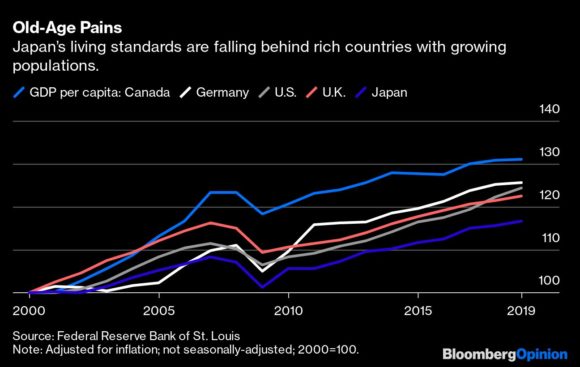 In concrete terms, this means more adults forced into spending hours doing eldercare, more taxes to pay for pensions and health care, and lower living standards for the elderly.

There’s also another potential cost to severe aging: macroeconomic dysfunction. According to standard macroeconomic theory, every country has a natural rate of interest; when interest rates linger above this natural level, a country slips into a deflation. Because the natural rate is tied to a country’s future overall growth rate, most theories agree that low population growth lowers the natural rate and makes it harder for central banks to ward off deflation.

As Japan’s population has leveled off, its economy has slipped into a seemingly permanent state of deflation or near-deflation: 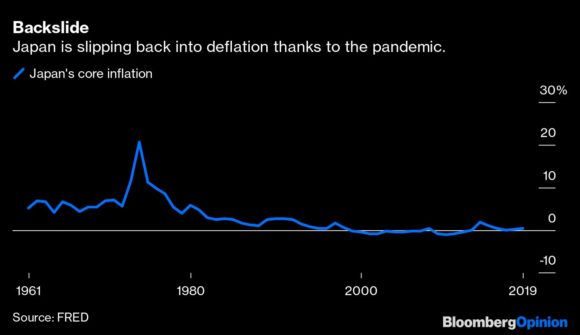 In the early 2010s after Prime Minister Shinzo Abe took office, the Bank of Japan made a heroic attempt to escape deflation, buying up assets at a prodigious, unprecedented pace. And for a while it seemed to work, with inflation rising almost to the 2% target rate. But it soon fell down to near zero again.

Now, thanks to the pandemic, Japan appears to be slipping back into deflation.

Some macroeconomists believe that persistent deflation threatens economic growth. It’s theoretically possible for a country to exist in a state of “secular stagnation,” in which prices can never rise and there’s always a bit too much unemployment. Japan doesn’t seem to be in this situation yet; unemployment is still very low. But this may be coming at the expense of productivity, since more Japanese people are getting hired for low-paying irregular jobs. Furthermore, fiscal stimulus, which economists typically offer as the remedy for secular stagnation, might be less effective in an aging society, as a recent IMF report explains.

Aging might also have another subtle corrosive effect on productivity. Especially in countries like Japan that promote people by seniority, a deficit of dynamic, fresh-thinking young people might make companies less nimble and less open to new ideas. Population shrinkage also saps the power of economic agglomeration, by making it harder to sustain a network of growing, productive cities.

Countries can, and do, try to compensate for population aging. Old people work longer, and more parents go to work instead of staying home with the kids. Countries also invest in automation; it’s no accident that Japan has pushed hard to be a leader in the field of robotics. But unless robots get much better, there’s probably a limit to how much these measures can fight the graying tide.

For now, global population continues to grow. That means that if countries skewing older can overcome domestic political hurdles, they can keep growing by taking in young working-age immigrants. That’s how Canada, the U.S., the U.K. and Germany have all grown faster than Japan, and it’s why Japan itself has been ramping up immigration.

But this solution will be temporary, because the transition to small families is happening all over the world. Fertility in Muslim countries, once believed to be bastions of high birth rates for religious reasons, has crashed in the last two decades. Even sub-Saharan Africa, the last bulwark of high fertility, is seeing its numbers fall faster and faster: 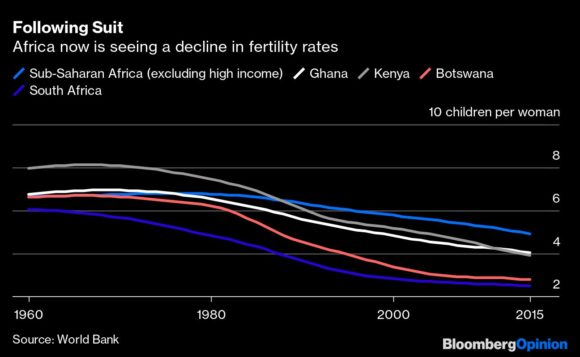 This doesn’t mean that the globe is headed for a childless future like the one depicted in the movie “Children of Men.” But it does mean that the window is closing for a few developed countries to continue to meet the challenges of population aging.

Societies like Japan are therefore on the front lines of what will eventually be a global challenge. The human species has never before dealt with prolonged and continuous aging. Countries need to continue to aggressively search for solutions — especially technological fixes like automation — in order to ease this unprecedented transition.

Photograph: An elderly woman, foreground, and man, background, are pictured at the Alpen Heitz elderly nursing home in Toyama City, Japan, on Thursday, February 9, 2006. Toyama Prefecture is aging much more rapidly than other areas of Japan. Currently the proportion of residents over 65 years of age stands at 19% and is predicted to reach nearly 30% by 2025. Photo credit: Andy Rain/Bloomberg via Getty Images.