A failed attempt to settle debt insurance on a struggling French car-rental company is the latest blow to the $9 trillion market in credit derivatives, but this time the focus is on speculators.

Protection buyers who didn’t hold any of Europcar Mobility Group’s underlying debt were left with nothing, due to a shortage of bonds to settle contracts at the auction on Wednesday.

Flaws in the instruments’ capacity to protect against losses have undermined confidence in the credit derivatives market in recent years. The problem with Europcar, which defaulted on its debt last month, was that bids exceeded available securities, driven both by bondholders that had already entered into a lock-up agreement and by traders that had placed outsized bets on a lucrative swaps payout.

“In this specific case, it is simply because of the positioning of market participants,” said Jochen Felsenheimer, managing director at XAIA Investment in Munich, who trades both markets, but didn’t have a position in Europcar. “If you speculate, you can lose money.” 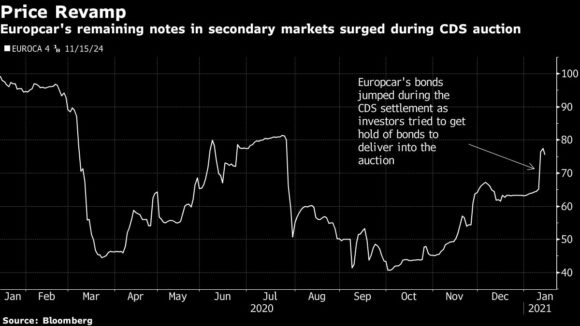 Dealers began holding auctions in 2005 to avoid such shortages after Delphi Corp.’s bankruptcy, when the amount of protection exceeded underlying debt by about 10 times.

A process was standardized in 2009 to settle swaps with the cash price set at auction rather than by physically delivering debt guaranteed by the instruments, though traders still have the option of selling bonds and loans into the auction. The market was overhauled in 2014 to fix glitches.

While there were enough bonds outstanding to have settled Europcar’s swaps, about 7 million euros ($8.5 million) more bonds were demanded than offered, according to Creditex and Markit data.

The mismatch set an automatic recovery value of 100% on about $100 million of swaps. Net holders of protection received nothing, but bondholders that hedged with credit-default swaps and delivered notes into the auction were compensated for their holdings.

“Since designing the auction, we used to tell participants that they can’t rely on someone else to provide liquidity in the auction, or we might one day end up with an auction settling at zero or 100,” said Athanassios Diplas, former senior adviser to the International Swaps and Derivatives Association board.

“Protection buyers in this case either genuinely didn’t have any bonds to offer or were asleep at the wheel.”

A settlement auction in 2019 set a rare final value of zero, with protection buyers on New Look Retail Group Ltd.’s most junior bonds getting paid in full.

For the most part, auctions have worked, with 19 settlements last year alone. And credit swaps, which fell out of favor after the financial crisis, have come back in vogue as default rates rise and a series of high-profile failures pay off for short sellers.

Still, Europcar is a reminder that the market doesn’t always function as expected.

“Some people will look at it and say this doesn’t work,” said Julien Petit, a portfolio manager at Ostrum Asset Management, who didn’t have a position in Europcar. “The lesson is that people playing in the CDS market have to pay attention to what’s going on in the situation they’re trying to cover.”

–With assistance from Jack Pitcher.