Australia is losing momentum in efforts to bring equality to the workforce, with a new study finding that it will probably take another 26 years until women are paid the same as men.

The gender pay gap is worst in finance and insurance firms, at almost 28%, versus 20% across the workforce as a whole, according to the study released by the government’s Workplace Gender Equality Agency and the Bankwest Curtin Economics Centre.

“This report reveals a worrying level of apathy and indifference among many Australian employers toward improving gender equality,” said WGEA chief Libby Lyons. “Expecting Australian women to wait a quarter of a century for the total remuneration gender pay gap to close is unacceptable.”

The findings come amid concern about the lack of safety, respect and equality for women in the workplace following revelations of a toxic male culture in Australia’s Parliament House. COVID-19 has also highlighted stark differences in job security, with 8% of women shunted out of employment during the peak of the crisis in April, compared to 4% of men.

At the current rate of change, there may be gender pay equality among executives in 10 years, and senior managers in 15 years, but the rate of change is far slower for non-management roles, the study found.

Finance and insurance firms have seen a 10 percentage points narrowing of the gender pay gap over the past seven years, but the number of female board directors in these companies remains low relative to the overall number of women working in the sector, according to the research.

The study found that organizations which set targets for female board representation had added women at twice the pace as those that didn’t. Yet it noted that these targets are becoming less common and less ambitious. 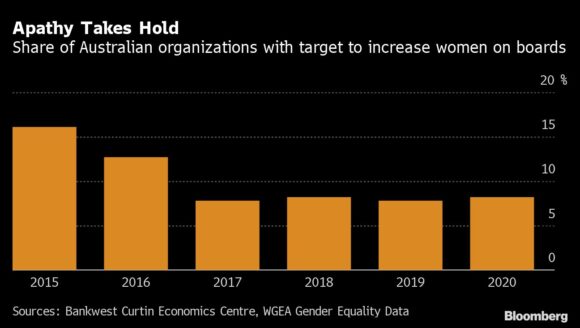 Data from the Australian Institute of Company Directors show that more than a third of S&P/ASX 200 companies still haven’t attained the threshold for 30% for women on boards. This isn’t due to a lack of qualified candidates, according to Nicola Wakefield Evans, the chair of 30% Club Australia.

“One of the most significant barriers to women’s progression to boards has been unconscious bias in recruitment practices and a tendency to rely on personal networks,” Wakefield Evans said.

Amid the backlash against the government on gender inequality, Prime Minister Scott Morrison said Thursday he wants to promote more women to his ministry. Currently, 16 lawmakers in Morrison’s 22-person cabinet are men.

Speculation is mounting that changes may be announced as soon as Friday.

More information on the report is available on the Bankwest Curtin Economics Centre’s website.