Global reinsurers’ underwriting performance will continue to improve in 2022 as premium rate increases take hold, with further rate hikes expected as a result of higher catastrophe losses, continued low interest rates and mounting inflation concerns, according to Fitch Ratings in a new report.

Nevertheless, concerns remain about how future underwriting results will be affected by deteriorating loss-cost trends, rising social inflation and litigation costs as well as the pace of the global economic recovery, said Fitch in its report titled “Global Reinsurers: Mid-Year 2021 Results.”

“Some of the largest price increases were in cyber reinsurance at 15%-40%, even for loss-free renewals,” Fitch noted. “Capacity is limited and very selective as reinsurers digest a recent sizable jump in ransomware claims.”

Non-life reinsurance net premiums written grew by a substantial 18.5% during the first half of 2021 on higher premium prices and demand, Fitch said, basing its calculations on the 17 reinsurers it monitors.

While reinsurance rates continued to harden in H1, pricing momentum slowed in 2021 following more than two years of improving rates, the report said. Fitch noted, however, that price increases are likely to continue at the January 2022 renewal, although at somewhat reduced high single-digit/low double-digit levels, as rate adequacy is approached. 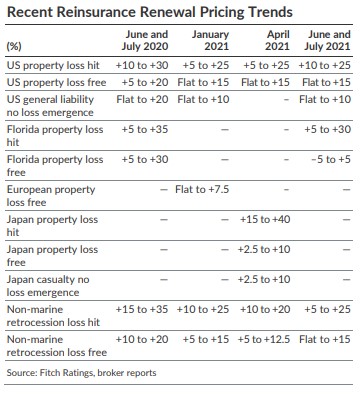 However, the report said that European property rates could be poised for an uptick in 2022, given recent increased catastrophe losses in the region.

“Some of the largest price increases were in cyber reinsurance at 15%-40%, even for loss-free renewals,” Fitch noted.

“Capacity is limited and very selective as reinsurers digest a recent sizable jump in ransomware claims. Reinsurance demand is significant, with nearly 40% of cyber risk reinsured, and growing with rising cyber attacks.”

Current pricing is still inadequate in the face of rising catastrophes, said Fitch, noting that global re/insured natural catastrophe losses were a manageable $40 billion in H1, up from $35 billion for the same period in 2020 and above the $33 billion 10-year average (2011–2020) of insured losses in H1.

However, July flooding in Europe could add $8 billion to catastrophe losses in H2 2021, with potential additional losses from the active Atlantic hurricane season, the report went on to say.

Pointing to the June/July 2021 Florida renewals, Fitch explained that reinsurers offered more capacity and better pricing to the higher-quality accounts at the expense of poor performers.

“Lower layers that have been hit more frequently in recent years priced up much more than remote upper layers that were not affected by losses,” Fitch explained. “Reinsurers reduced their overall Florida exposure, particularly to the vulnerable Florida specialist companies.”

Casualty reinsurance rate increases at the mid-year 2021 renewals were similar to January 2021 and should continue to rise into 2022 as rates are generally not exceeding loss trends, the report said.

“Primary rate increases continue to drive reinsurance pricing, with cedents increasing retentions and switching to excess of loss from quota share to keep more of the profitable business,” it continued. “As a result, reinsurers are paying 1-3 points higher ceding commissions up to the mid-30s percent to access this business.”

Thus far, renewals largely have not taken into consideration pandemic-related losses, but this could change in 2022 as more clarity is developed around the ultimate losses, although communicable disease exclusions remain widespread in property reinsurance treaties, Fitch continued.