China’s Ping An Insurance (Group) Co. has long argued it should be treated like a high-growth technology company instead of a seller of life policies. After a $90 billion plunge in its market value, it’s now priced more like a property developer at a time when the country’s real estate sector is out of favor.

This year’s 40% stock dive has cut its price-to-earnings ratio to just above 6, slightly more than the Shanghai Stock Exchange Property Index’s multiple of 5.7 and a far cry from the 20-plus commanded by insurance peers Berkshire Hathaway Inc. and AIA Group Ltd. That’s been fueled by a botched real estate investment, Beijing’s technology crackdown that hit the value of its spinoffs and a slumping life business.

Ping An’s business model relies on investing in online platforms such as health care site Good Doctor and Autohome Inc. to draw in customers for its policies and wealth management products. Those users provide data to refine its insurance business and generate revenue it then plows into other sites. Except its backbone life business is now struggling and a soured multibillion-dollar investment in China Fortune Land Development Co. has raised concerns about Ping An’s exposure to other developers.

“Tech had been a very good selling point for Ping An in recent years, but might have lost its luster,” said Steven Lam, a Hong Kong-based analyst with Bloomberg Intelligence. “Many international investors are now allergic to the uncertainties in China market.”

For all its success with technology, including chatbots and artificial intelligence that settle car insurance claims within minutes, the pandemic and an aging population have eroded consumer willingness to commit to long-term life policies.

“Technology can bring efficiency, but the problem is more with demand,” Lam said. “How can AI create demand?” 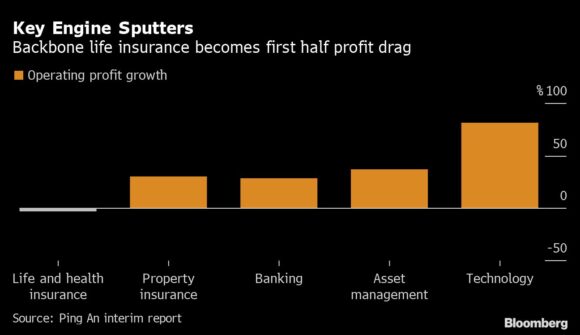 While Ping An is turning to technology to bolster the productivity of top salespeople, and getting rid of poor performers, it also has to contend with China’s shifting job landscape. The average monthly income for a Ping An agent fell 8% to 5,793 yuan ($897) last year. That can make it less financially appealing than delivering food at Meituan.

“We expect Ping An to first stabilize its agent force and demonstrate higher productivity for the premium agent group,” said Iris Tan, a senior analyst at Morningstar in Shenzhen. It also needs to ease market concern about property investments, she said.

Ping An said the market doesn’t full understand its efforts to reform life insurance and other capabilities, citing share buybacks as a sign of management’s confidence.

“The fluctuations in the stock price are temporary, but Ping An’s strategy is clear, its finances prudent and business stable,” the company said in response to questions from Bloomberg News.

The pain from a sweeping crackdown on China’s highly leveraged developers has already been reflected in Ping An’s results, with impairments on China Fortune erasing 20.8 billion yuan from first-half earnings. The insurer spent $2 billion for a 20% stake in 2018 and it now owns 25% of a company that became the first Chinese developer to default since Beijing tightened controls last year. The crackdown on real estate is pushing up risks on an asset class long sought after to match long-term insurance liabilities.

“Ping An has quite some property exposure and it’s difficult for the market to gauge,” said Zhang Qingyun, deputy general manager of China Vision Capital Management, a Beijing-based private fund.

Shaking off perceptions about property is proving a challenge, especially with companies such as China Evergrande Group dominating headlines. In August, Ping An said 4.8% of its insurance investment fund is in real estate while the top-rated analyst on the stock puts the number at more than double that figure, although Ping An disputes the assessment.

“We are more pessimistic than the market on Ping An’s investment exposure,” Leon Qi at Daiwa Capital Markets said in a Sept. 24 report. Qi’s recommendation has delivered the best returns on the stock over the past year according to Bloomberg Absolute Return Rankings. Qi, who rates the stock hold, wasn’t available to comment to Bloomberg News.

Other analysts are more optimistic with 31 of the 33 tracked by Bloomberg recommending investors buy its Hong Kong-traded stock. The restructuring of China Fortune has come out better than expected and should spare Ping An further impairments and may even allow it to recoup some earlier losses, CSC Financial Co. analysts wrote in a report Oct. 7.

In the past, Ping An has reaped windfalls by selling some of its tech investments in initial public offerings, including Lufax Holding Ltd. and Ping An Healthcare and Technology Co., the corporate name for Good Doctor. But with Beijing cracking down on the private sector, the shares of its tech investments have all slumped in 2021 just as the path to overseas IPOs for other startups it has incubated becomes murkier. 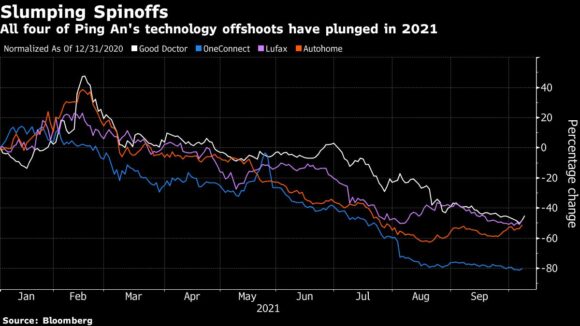 Ping An knows that winning over the doubters when investors are increasingly taking a hard line on missed opportunities will be key.

“The market seems to be excessively worried about Ping An,” said Zhou Min, founder and portfolio manager of hedge fund Everest Growth Capital. “Investors will need to wait and see when business fundamentals actually improve.”

Brown & Brown Continues Its Rebranding With Focus on 130 Retail Locations