The global insurance industry can currently expect a long-run annual average loss of $106 billion and a greater than a 40% chance of experiencing an annual loss of more than $200 billion in the next decade, according to Boston-based modeling firm AIR Worldwide.

The annual average loss (AAL) of $106 billion “notably exceeds the actual average [annual] loss of the past decade of approximately $75 billion and is a stark reminder that we have been fortunate to not have had a major tropical cyclone or earthquake event in a highly populated region,” said Bill Churney, president of AIR Worldwide, in a statement accompanying the report’s publication.

AIR calculates the 10 year average of insured losses to be about $75 billion, but the higher losses of the past few years are not model outliers because the models take into account the possibility of tail risk such as 20, 100, and 250-year return periods, explained Kevin Long, senior director, Public Relations & Social Media for AIR, during the interview. (See chart below). 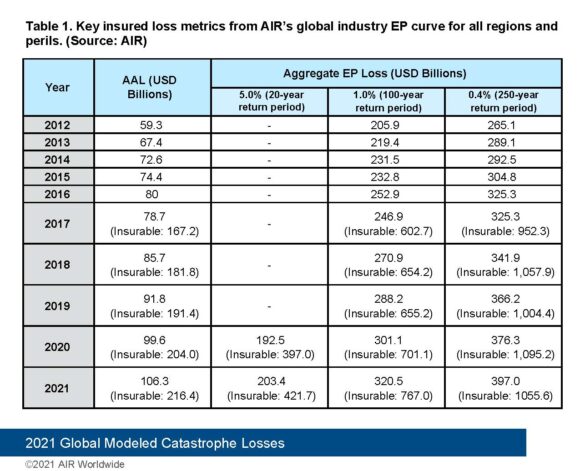 “Our models are showing actual losses on an annual average loss basis could be much higher,” said Long “So years like this year and last year are not outliers because in fact such years have been considered by our models for quite some time.”

This year the industry has experienced losses above $70 billion, year to date, which is lower than AIR’s AAL of $106 billion, said Padmanabhan.

In its report, AIR said average annual insured losses and the metrics for all regions and perils modeled by AIR have generally increased since its first white paper was published in 2012.

“This is expected; the rise reflects both increases in the numbers and values of insured properties in areas of high hazard and the inclusion of regions and perils for which new models are now available,” said the report.

Long explained that the numbers also will continue to rise as new models and perils are added to AIR’s portfolio.

“The pace of climate change will evolve over time and will likely lead to larger losses…,” he noted.

See AIR’s website portal on climate change for more information on how the frequency and intensity of atmospheric perils such as tropical cyclones, extratropical cyclones, severe storms, wildfires, inland floods and coastal floods might change as the climate warms.

In its latest modeling report, AIR has determined that global economic losses (which included insured, uninsured losses and as well as losses from non-insurable sources such as infrastructure and lost economic productivity) are about three times higher than global insured losses on average, when trended to 2020 dollars. As a result, AIR’s modeled global insured AAL of $106 billion would correspond to an economic AAL of more than $320 billion.

On a regional basis, the percentage of economic loss from natural disasters, which is insured, varies considerably, AIR added.

The AIR report pointed to the fact that in North America about 50% of the economic loss from natural disasters is insured, while in Asia and Latin America, insured losses account for only about 12% and 24% of economic losses, respectively, which reflect the very low insurance penetration in these regions.

The portion of economic losses that is insured also varies significantly by peril, with coverage for flood and earthquake losses typically much lower than for risk from wind and fire, said AIR.