A summary of these new hires follows here.

Whiteman joins the company as SVP, head of International Transactional Liability, reporting to William Monat, global head of Transactional Liability. Previously head of London and emerging markets at Liberty Mutual, Whiteman will manage Mosaic’s transactional liability underwriting outside of North America with initial focus on the UK and the Europe, the Middle East, and Africa (EMEA) region.

Gofton-Salmond joins Mosaic as VP, manager, Transactional Liability. With over a decade of experience advising on and underwriting M&A transactions, he joins from AIG, where he was a senior underwriter with a focus on providing insurance for M&A deals across the UK, Europe and emerging markets.

“This is an important juncture in Mosaic’s development as we approach the end of our first calendar year,” said Co-CEO Mark Wheeler. “Transactional liability is a core focus of our model and growth strategy, and a product line we expect to grow exponentially, in North America and beyond. The fast-paced development of our M&A platform, first in the U.S. and now ramping up in London, serves the rising needs of clients in an unprecedented environment.”

Berkshire Hathaway Specialty Insurance (BHSI) announced it has promoted Chris Warrior to head of Executive & Professional Lines in the UK, and named Jessica Kirby as head of Commercial Management Liability Insurance in the UK.

Warrior joined BHSI in 2019 as head of Management Liability for the UK and Ireland. In his new role, he will oversee BHSI’s UK team and portfolio across all executive and professional lines, including management liability and professional indemnity, cyber and transactional liability insurance. Warrior has nearly two decades of experience underwriting in the UK marketplace. He can continue to be reached at chris.warrior@bhspecialty.com

Kirby Joined BHSI in 2018 as senior underwriter, Commercial D&O. In her new role as head of Commercial Management Liability for the UK, she will oversee the team and portfolio she has played a critical role in building for BHSI in the UK. Kirby has nearly 15 years of experience in the UK Financial Lines market. She can continue to be reached at Jessica.kirby@bhspecialty.com. 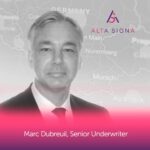 Dubreuil joined Alta Signa from Marsh where he was a financial lines manager, based in Paris. He was previously a team leader and D&O chief underwriting officer with AXA and prior to this, he was a senior financial lines underwriter with AIG.

Dubreuil has more than 10 years of financial lines underwriting experience in France.

In addition, Alta Signa has launched in Belgium and set up branch offices in Spain and Italy over the past year. It recently received regulatory approval for further branch offices in Germany, Austria and the Netherlands, and expects these to become fully operational in the near future.