Ukraine has suffered $4.3 billion in damage to farmland, machinery and livestock as a result of Russia’s invasion, according to the Kyiv School of Economics.

About half of the “already immense” destruction from the war comes from pollution caused by mines and unharvested crops, according to a report by authors Roman Neyter, Hryhorii Stolnikovych, and Oleg Nivievskyi. Almost a quarter of the total — $926 million — accounts for damage done to farm machinery due to military activity and occupation, they write.

Russia is using food security as an economic weapon, according to Tymofiy Mylovanov, a former minister and a president of Kyiv School of Economics. “They are trying to take over farmland for people to collaborate,” he said in an interview. “They are moving crops away. They are taking food which otherwise would have been consumed in those areas and they’re moving it to Russian areas.”

Russia’s attacks on key agriculture infrastructure hubs have destroyed large quantities of food. Meanwhile, its blockade of Ukraine’s ports has strangled the country’s exports, cutting off a key source of revenues and worsening a global food crisis that may spur millions of people to migrate. Moscow denies targeting civilian installations and infrastructure, despite widespread evidence to the contrary. 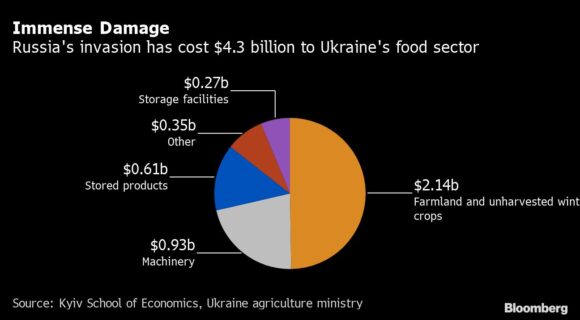 Global food prices are near record highs, with millions of tons of grain and vegetable oil stuck in Ukraine. Efforts to reopen the ports are stumbling, with no sign of progress on a deal, while removing sea mines could take months, according to a UN agency.

Farmland in frontline and formerly occupied areas has a high risk of pollution caused by mines which “imposes a mortal threat to Ukrainian farmers during the field works,” the report said, estimating that $436 million may be needed for demining.

Ukrainian grain shippers have carved out new export routes via the Baltic Sea to send their crops abroad, but sales remain well short of their normal pace, and the country is expected to run out of room to store coming harvests.

The authors calculate that 5.7 million poultry have died due to the war, while $613 million worth of grain has been stolen from occupied regions of Ukraine and sent to Russia.

“Farm animals are dying directly because of the hostilities and because of the farmers’ inability to either access the farm or get animal feed and provide animals with needed veterinary support and care,” the report said.

–With assistance from Megan Durisin.