Munich Re for the second-straight year holds the top spot in AM Best’s annual ranking of the Top 50 Global Reinsurance groups in 2021, followed once again by Swiss Re. The two global reinsurers together account for 24.3% of top 50 reinsurance gross premiums written in 2021.

Total reinsurance gross premiums written by the top 50 reinsurers increased in 2021 by 9.8% to US$353 billion from US$321 billion in the previous year, according to Best’s Market Segment Report titled “World’s 50 Largest Reinsurers.”

The report notes that for this new ranking, as well for as the previous one, the analysis included just year-end gross reinsurance premiums written, eliminating any primary premiums. Rankings prior to 2021 had included primary premium that was less than 25% of a reinsurers’ total premium volume. 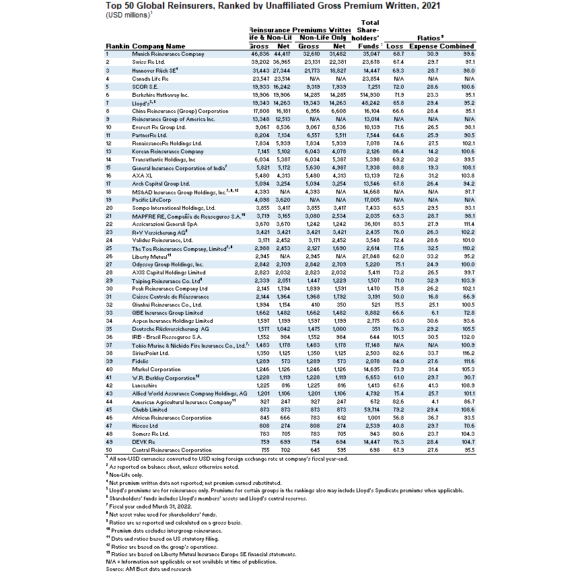 “Many of the reinsurance companies AM Best rates reported that a third to half of their premium growth could be attributed to pricing increases, as opposed to exposure growth,” said Clare Finnegan, senior financial analyst, AM Best in a statement. “Rate increases in many of the reinsurance lines are expected in 2023, although they will vary by line of business and territory.”

The report noted that reductions in property catastrophe reinsurance premium also could counter growth, as some reinsurers have begun to withdraw or substantially reduce their participation in that market.

Although the top three reinsurers occupied the same spots from last year’s ranking, there was movement among the other companies in the top 10 in the latest ranking. Notably, Canada Life Re moved up to No. 4, the first time a solely life reinsurance group has ever made the top four, the AM Best report said.