Farmers and ranchers across Kansas are wrapping up the 2014 growing season, marked by rapidly changing fortunes that were buffeted by weather and markets.

“On the livestock side it was very, very good because of high prices. On the crop side, we certainly had lower prices,” said Dan O’Brien, a Kansas State University extension specialist.

The Kansas winter wheat crop bore the brunt of drought conditions that decimated fields early this year. Farmers abandoned more than 8 percent of the 9.6 million acres planted, which was followed by untimely late-spring rains that mired combines in mud as they tried to cut the stunted crop.

Farmers averaged a mere 28 bushels of wheat for a total production statewide of 246.4 million bushels. The small harvest didn’t translate into higher prices, however, because global wheat supplies are more than adequate to make up for shortfalls across the nation’s plains states, the U.S. Agriculture Department projections said.

U.S. wheat prices are at the lowest level in four years due in part to limited exports, O’Brien noted in his December market outlook. But wheat prices have rallied of late amid concerns of drought in Australia and moves by Russia to limit its own grain exports as a way to keep bread prices from spiking as its deals with the collapse of its currency, O’Brien said.

“The challenge is, ‘Do people still own the wheat or did they let it go at lower prices?”‘ O’Brien said. The average break-even price of wheat in Kansas was $5.46 per bushel, but with the recent rally, it’s selling at around $6.63, he said. 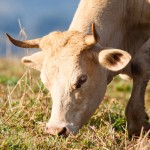 Meanwhile, timely rains this past summer and fall helped the state’s other crops. In the last three days of May, some places in Kansas saw as much rain than the previous three months combined. And the rains continued into June, when the statewide average rainfall of 7.25 inches made it the wettest June since 1890, state climatologist Mary Knapp said.

There were ample harvests of fall crops, such as corn, sorghum and soybeans, and grain prices tumbled – a lot.

Corn prices plummeted 40 percent before recovering, and are now down 24 percent for the year – a big hit for farmers’ bottom line. The average break-even price for dryland corn is between $4.40 and $4.50 a bushel, O’Brien said. But at the grain elevator in Pratt now corn is hovering around $4.18 a bushel – well below the cost of production.

Prices for other major fall crops remain barely above the price what farmers need to get to break even, O’Brien said.

Profits were fat for cattle producers, who enjoyed an unprecedented rebound in prices thanks to greening pastures for livestock, coupled with cheap corn to fatten the animals.

The mood was palpably upbeat at the Kansas Livestock Association’s annual convention earlier this month. CattleFax Executive Vice President Randy Blach told the producers they can continue to make good profits in the coming years, though cattle prices will soften amid more competition next year from increased pork and poultry production.

Meanwhile, the weather outlook for January through March has given farmers hope for the 2015 growing season. Forecasts call for wetter than normal conditions, Knapp said. But she also noted the drought has been four years in the making in some parts of the state.

“It’s not as pronounced, but it’s not cured,” O’Brien said. “It is premature to say we are out of the drought.”