Michigan legislation that would allow passengers to drink beer or wine aboard pedal-powered trolleys isn’t getting unanimous support from people who shuttle people around town.

Lawmakers have sent bills to Gov. Rick Snyder that would make drinks an option on so-called quadricycles. They’re popular in Grand Rapids, Traverse City and Marquette, especially as a way to visit small breweries.

Laurie Ryan, owner of the Great Lakes Pub Cruiser in Grand Rapids, said the cost of liability insurance for her 15-seat trolley would double. She also doesn’t want drunken riders to fall.

“It’s really easy when you hit a bump to get ejected from it,” Ryan told The Detroit News. “I’m absolutely against this bill.” 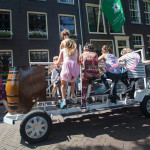 In Marquette, in the Upper Peninsula, the owner of U.P. Pedal Cruiser said the driver, who can’t drink, still is in control.

“I don’t see any danger to it at all. … A lot of people think those things are situated around drinking, and they’re really not,” said Jesse Schramm, noting that customers often ride to see the Lake Superior shore in Marquette.

TC Cycle Pub takes people from pub to pub where customers have 20 minutes at each stop for a drink. Todd Klepper, general manager at The Filling Station in Traverse City, believes drinking on the pedal cab would allow people to slow their consumption.

“I think it’s better to consume at your leisure,” Klepper said.

“You wouldn’t be selling alcohol on board,” he said.